Suspects Arrested For Stealing Two Bicycles Worth N3m, Sales Them For 10,000


The police in Lagos State have arrested two suspects, Umaru Babangida and John Samuel, in connection with the stealing of two exotic sports bicycles worth about N3m. 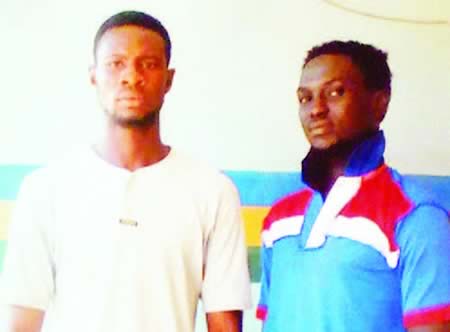 According to Punch, the bicycles belong to a resident of Babatunde Crescent, Lekki Phase 1, identified as Osarenkhme Afe. It was gathered that the stolen items, a Scott X10 hybrid bicycle and a giant defy advanced carbon fibre road bicycle, were valued at N1.1M and N1.9m respectively.


Twenty-year-old Babangida, was said to have bought the Scott X10 hybrid bicycle from Samuel and other suspects at large for N10,000.

They were apprehended on October 22, after the case was reported to the police at the Maroko Police Division.

Punch gathered that Afe had come back from morning jogging on September 14, when he discovered that the bicycles had been stolen.

It was learnt that the thieves had crept into the building when a security guard manning it had slept off, stealing the guard’s phone and the bicycles.

One of the suspects, Babangida, told the police that he was initially suspicious that the bicycle was stolen, but decided to buy it after assurances that there was no problem.

He said,
“I bought the bicycle from a man that was brought to me by John (Samuel). I bought it for N10,000 but he didn’t give me a receipt. The man said it belonged to him and that I should not worry.”Samuel denied the knowledge of the theft, saying he only facilitated the selling of the bicycle to Babangida.
“I met a man on the road and he said he wanted to sell a bicycle. I told him I didn’t have money and took him to my friend, Babangida. I didn’t know it was stolen,” he added.A police prosecutor, Inspector Philip Osijale, on Monday arraigned the two suspects before a Tinubu Magistrate’s Court on three counts bordering on stealing and receiving stolen property.

The charges read in part,
“That you, John Samuel and others now at large on September 14, 2016, at about 6.30am, at Babatunde Crescent, Lekki Phase 1, Lagos, in the Eti-Osa Local Government Area, within the Lagos Magisterial District, did steal one giant defy advanced carbon fibre road bicycle valued at N1.935,000, and one Scott X10 hybrid bicycle valued at N1.1m, property of one Osarenkhme Afe, thereby committing an offence punishable under Section  285 of the Criminal Law of Lagos State, 2011.”The defendants pleaded not guilty and were granted bail in the sum of N500,000 with two sureties each in like sum by a presiding magistrate, Mrs. M.B. Folami.