Police Arrest A Pastor And His Church Member For Robbery


The Zone 2 Police Command, Onikan, Lagos State, has arrested a 45-year-old pastor, Joseph Olude, and his church member, Rasak Raheem, for allegedly robbing in the Idiroko-Oke Odan area, a border community between Ogun State, Nigeria, and the Benin Republic. 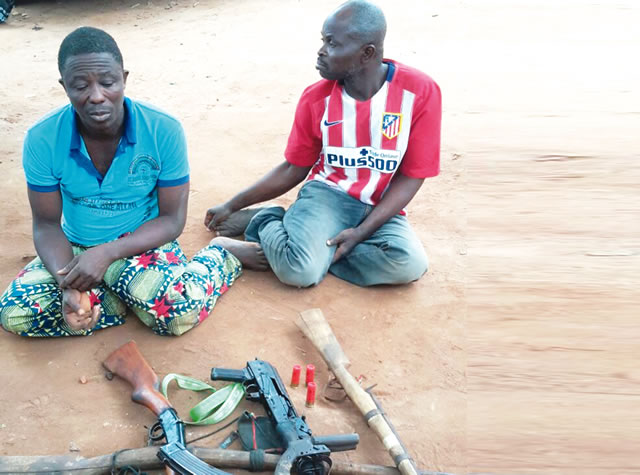 According to Punch, Olude and Raheem were arrested by the operatives of the Zonal Intervention Squad, after a tip-off.


It was learnt that while the police arrested the two suspects, other members of the gang fled.

Punch gathered that on Thursday, August 11, the police received information that a robbery gang was operating in the Idiroko-Oke Odan area, and dispossessing motorists of their valuables.

A businessman, who was moving money from Nigeria to the Benin Republic, was said to have put a distress call across to the police.

The two suspects were thereafter arrested.

Speaking, Olude, a father of five children, said he owned a church, Elohim Cherubim and Seraphim Church, in the Hunbe, Ajegunle area of Ogun State.

The pastor, who added that Raheem came to his church for a special prayer, explained that he did not know that Raheem and his friend, one Bidemi, were armed robbers and kept guns on the church premises.

He said, “I have five children. I was arrested when the police found five guns on my premises.  It was my church member, Bidemi, who invited Raheem.

“Raheem was brought into my church in February 2016, after he was infected with a Sexually Transmitted Disease. He also owed a house rent. So, he came to live in the church. I did not suspect that he was bringing in stolen goods into the church’s premises.

“I knew the time when someone came to collect a gun from him. Bidemi usually dressed like a policeman. I did not know that he was a robber. Now, Bidemi has fled.”

Raheem, who hails from Abeokuta, Ogun State, said the pastor was aware that some robbers brought guns to keep with him in the church.

He said, “The pastor and I are friends. I went to his church and a man called Bode from Cotonou brought the guns. I told the pastor that the guns were for safekeeping in the church and he said there was no problem.

“About two weeks ago, Bidemi called me that he wanted to use the guns around the border area. I said he should bring N10,000 when coming and he agreed.

“The robbers collected the guns and when they were done with the use, they paid another N10,000. I knew they used the guns to rob. It was a five-man gang.”

The Zone 2 police spokesperson, SP Muyiwa Adejobi, said the Assistant Inspector-General of Police, Abdulmajid Ali, had ordered a thorough investigation into the case.

He said, “The suspects operated along border areas of Ogun State, Benin Republic and even Togo. The ZIS operatives were detailed to the scene and they arrested the two suspects along Madoga Road between Nigeria and the Benin Republic.

“The police recovered one AK-47 rifle fully loaded with 30 rounds of live ammunition, and 15 extra AK-47 ammunition. Effort is on to arrest the fleeing members of the gang.”