Pandemonium broke out in the early hours of Monday in Kubwa, a satellite town in Abuja, when the residents woke up to the sound of sporadic shooting by armed robbers who robbed a bank customer of N4.3 million in front of Access Bank. 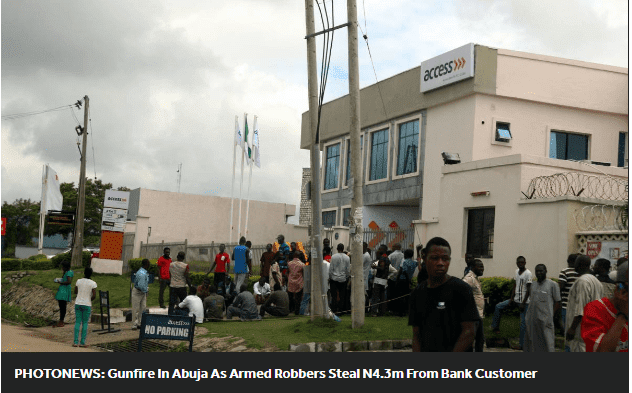 The robbery took place at 10:00 AM on Monday at the entrance of the bank located at Phase 4. Robbers drove in commando-style to block the customer who came to make a deposit.

According to an eyewitness, Jubril Mohammed, the victim was a staff of Total Filling Station who came to deposit money in the bank. He was trailed by men who shot his vehicle and then robbed him.
"I was standing right here when I saw a car in high-speed stop right in front of the bank. Four men came out with guns and they started shooting at a car. One of them opened the trunk of the car and removed a bag filled with money," Mr. Mohammed told our correspondent.                                                      It was gathered that the robbers, brandishing sophisticated weapons, followed their victim from the filling station when they got wind that he would be taking cash to the bank.

The robbers carted away the sum of N4.3m, leaving behind the victim's bullet-riddled vehicle. Our correspondent confirmed that the victim did not sustain any physical injuries. SaharaReporters gathered, however, that one of the staff of Etisalat, who operate a mobile shop in front of the bank, was shot in the melee and rushed to the hospital.

A police officer who was attached to the bank also exchanged fire with the robbers while residents were said to have scampered for safety when the sound of AK-47 rifles echoed throughout the neighborhood.

At the time this report was filed, armed policemen had arrived at the scene of the incident after the assailants had already fled. The police gathered evidence, including a cartridge of live ammunition and the victim's vehicle.

Business activities in the bank have been put on hold as customers were turned back. Efforts to receive comments from the bank manager proved abortive as the security guard said that the bank had been closed for operation and he could not allow anybody to gain access into the premises.

When journalists visited the Area Commander, R.O Kalu, at Phase 4 Divisional Police Station to ascertain if there was any arrest in respect of the robbery, the commander declined to comment and therefore directed them to the FCT Commissioner of Police.