A widow has been paraded by Lagos State Police Command alongside some criminals for allegedly recruiting young schoolgirls as commercial sex workers in a hotel in Surulere area of the state during school hours. 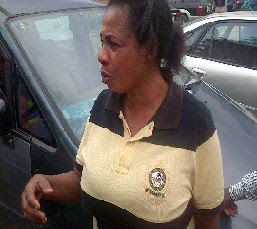 The suspect, identified as Chinonso Okolokwo, said she was a commercial sex worker at the said hotel located at Ikate area of Surulere but denied the charge.

Briefing newsmen on her arrest, the Commissioner of Police, Lagos State Command, Mr. Fatai Owoseni, disclosed that the suspect’s method was to lure the students from different secondary schools around Surulere to the hotel.

Okolokwo, according to the CP, would give the students clothes to change into and use them as sex
slaves until school closing hours. Some of the students, as gathered, went home with between N1,000 and N2,000, depending on the number of men they attended to. But the amount, it was learned, was just 10 percent of what was paid by their male customers, while the rest was allegedly pocketed by their managers, among who is Okolokwo.

Speaking with Vanguard, Okolokwo who is from Ebonyi State, said:
“I do not know anything about the schoolgirls. I am also a ‘hustler’ at Sunderland Hotel. I took to prostitution after the death of my husband 11 years ago. I have four children, but two died before my husband. I lodged at the hotel for a week or two before going home to take care of my children with the proceeds. Several girls from Abuja and other parts of the country come there to hustle as well. Police raided the hotel and arrested me. I am not connected with what they alleged.” Owoseni said investigation was still ongoing to ascertain whether there was connivance between management of the hotel, the schools authorities, the suspect and her fleeing cohorts.