JOHN TERRY IS MY NUMBER ONE - MOURINHO 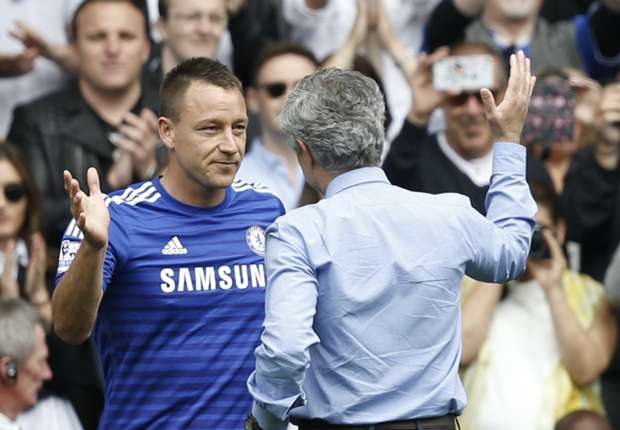 The Blues legend has been left out of the last
two matches due to tactical reasons but his
Portuguese boss has lauded the skipper in the
aftermath of their derby victory
Chelsea manager Jose Mourinho described
John Terry as his go-to man despite leaving the
captain on the bench in their 2-0 win over
Arsenal.

Terry has been publicly backed by his manager
after suggestions a rift had developed between
the two due to the defender's lack of playing
time.

The veteran was benched at Stamford Bridge on
Saturday, with Kurt Zouma preferred, but
Mourinho said he had no reason to explain his
decision to Terry, who he described as the man
he always turned to.

"John Terry doesn't need me to speak with him
because he knows what I feel, what I think," he
told a news conference.

"He knows the relationship, he knows that he's
my man. He knows that if I need to choose one
out of 25 to be my man, he's the first.
"He knows that I care about him as a person,
as a player."

Mourinho said his decision to leave Terry out
was tactical due to the threat of Theo Walcott's
pace and stated his respect for his 34-year-old
defender.

"He knows that nothing is a risk, he knows that
my decision only had one intention, which was
to help my team to win the match," he
continued.

"I thought that Arsenal was coming, playing a
defensive game, with a very fast striker that
gets behind people.
"If we don't need to win the game so much,
probably we would keep our block lower and
more compact.

"Because we desperately need a victory, we
couldn't wait, we had to bring our defensive line
up and to play against Theo Walcott the best
player we have is Zouma.

"And John knows the way I think and if he's
always a fantastic captain, I think today he was
even better.

"If every player has lots of respect for him, the
way he's reacted in the last days to this
situation, he has even more respect from the
players.

"If you want to paint a dark picture, I ask you
please don't do it because it's not the reality.
He's in great condition and in a great situation
with the manager and with the club."