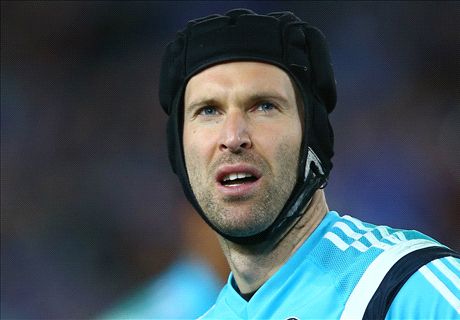 Neither club has officially announced the
transfer for veteran Cech

But Sportsmail understand the 33-year-old's
signing has gone through

Arsenal have completed the signing of Chelsea's Petr
Cech and the goalkeeper could face his former club
as soon as August 2 in the Community Shield at
Wembley.

Talks over an Â£11million deal have been ongoing
since the season ended and Arsenal manager Arsene
Wenger has finally made the 33-year-old his first
signing of the summer.

Jose Mourinho was reluctant to sell Cech to a direct
Barclays Premier League rival but, although there has
been no official confirmation, Sportsmail understand
the transfer has gone through.

Paris Saint-Germain formally approached Chelsea
about the veteran but the Czech Republic
international preferred to stay in London where his
family are based.

Cech wanted to leave Chelsea after playing second
fiddle to Thibaut Courtois during their title-winning
season, and owner Roman Abramovich has granted
him his wish.

Cech's arrival means either Wojciech Szczesny or
David Ospina, who is wanted by Fenerbahce, is likely
to leave Arsenal this summer.

Ospina ended last season as Wenger's No 1, playing
a crucial role in guiding Arsenal to Champions
League qualification in third place, but the Colombia
international is the most likely to be sold.
Cech had one year left on his contract at Stamford

Bridge but his move also means Chelsea goalkeeping
coach Christophe Lollichon could follow him to
Arsenal.

Mourinho, meanwhile, is set to search for Cech's
replacement with Stoke City goalkeeper Asmir
Begovic understood to be his prime target.

Chelsea captain John Terry gave Arsenal supporters
an idea of what to expect from Cech on Monday by
claiming the man with four Premier League titles will
save them '12 to 15 points a season'.

Cech spent 11 years at Stamford Bridge and Terry
told talkSPORT the goalkeeper can be the difference
between first and second place.

Cech joined Chelsea in 2004 from Rennes and made
333 appearances in the Premier League for the club.