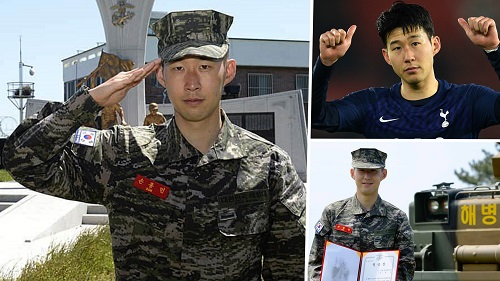 Tottenham star Son Heung-min has completed his mandatory three-week military service in South Korea, with the Spurs forward reportedly boasting the best performance of all the trainees who had been taking part.

According to information published by the Korea Herald , the attacker finished as one of only five individuals to receive an award at the Marine Corps' training camp graduation ceremony on the southern island of Jeju.

While the exact scores of the trainees were not revealed, officials were quoted as saying that Son finished top out of a total of 157 people.


The Premier League ace arrived at the camp on April 20 for a period of three weeks, with his military service having previously been delayed after the 27-year-old inspired his national team to a gold medal at the 2018 Asian Games.

During his time back in his home nation, Son participated in a program that included shooting and bayonet skills, chemical, biological and radiological training, individual fighting skills and medical training. It is said that Son scored a perfect 10 out of 10 in the shooting discipline.

"He received the 'Pilsung' prize which is one of five types of awards for best performers," a Marine Corps officer said, as quoted by the Korea Herald . 'Pilsung', which translates as 'certain victory', is the battle cry of the South Korean Marine Corps, Navy and Air Force.


"All the courses were judged in a fair and strict manner, and his military training officers have said he went through the training faithfully," the official added.


🇰🇷 Heung-Min Son has completed his mandatory military service in South Korea. He is due to return to London next week.