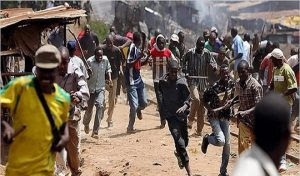 An unconfirmed number of persons have been allegedly killed in a communal clash between Omor and Umumbo communities in Ayamelum Local Government Area of Anambra State.

It was also gathered that about 50 persons were allegedly abducted, while over 300 farmers sustained bullet and machete injuries in the clash.

According to an insider, the squabble started last year during the dry season farming but was quickly brought under control. A witness, who did not want his name in print said some houses, shops and rice mills belonging to Umumbo community were destroyed in the clash in Omor and environs.

According to him, by the time the police were drafted to the area, it was found that no fewer than 50 persons were missing.


The spokesperson of Anambra State Police Command, SP Haruna Mohammed, said a detachment of policemen had been drafted to the communities and the situation was brought under control.

Meanwhile, Anambra State Government in a statement issued by the Commissioner for Information and Public Enlightenment Mr C. Don Adinuba said the conflict is a negation of the effort of the government and people in the past six years to make the state safe and secure among states in the federation.