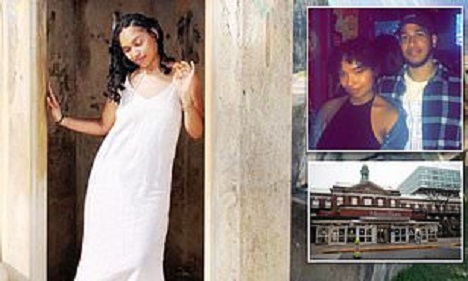 Amber Rose Isaac, 26, first tweeted her outrage against medical staff at the Montefiore Medical Center in the Bronx on April 17.

'Can’t wait to write a tell all about my experience during my last two trimesters dealing with incompetent doctors at Montefiore,' she wrote.

That would be Isaac's final tweet before she unexpectedly died after a caesarean section gone wrong just after midnight on April 21.

She never got a chance to meet her newborn son, Elias, before she bled out after her platelet levels - which help blood clot - dropped dangerously low.

She died alone, away from family and her partner, as hospitals in New York have restricted access amid the coronavirus pandemic.

Montefiore Medical Center is the same hospital her mother worked at for 25 years, but Isaac switched facilities after she felt continuously slighted and mishandled by staff at her original branch.

Although her allegations against Montefiore Medical Center have recently surfaced, Isaac had feared for months that she wouldn't make it out of childbirth.

She told her partner and father of their child, Bruce McIntyre III, that she had a dream that she didn't survive surgery.

'She had mentioned to me that she feels like she’s not gonna make it,' McIntyre, 28, told The City.

'And I would try my best to cheer her up. She would tell her mom she’s really glad the baby is healthy, but she’s scared that she’s not gonna make it.'

Staff allegedly ignored Isaac - a black, Puerto Rican woman - even as she contacted them in her final weeks.

'I feel like she would have got more attentive care if she was a white mother, to be completely honest with you.'

When Isaac learned she was pregnant with her first child last year, she spent several months diving into information about maternal death.

While maternal mortality rates in the US continues to lag behind other. similarly wealth countries, black mothers have taken the brunt of mistreatment.

Black mothers died at a rate three to four times high than their white counterparts.

And fears over Isaac's safety were exacerbated when her platelet levels began falling in February.

Isaac, who at the time was seven months pregnant, 'knew she needed to be seen' but did not receive any in-person treatment from doctors throughout part of February and all of March.

Instead, she was redirected to video meetings online in place of office visits as the COVID-19 pandemic savaged New York City. 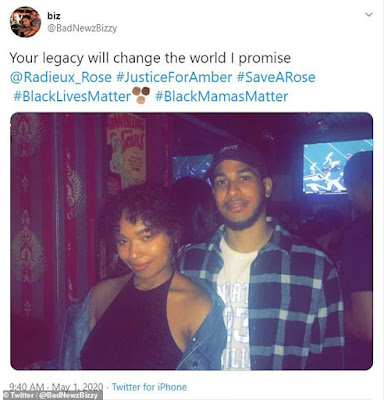 McIntyre, who often drove Isaac to her appointments, wasn't sure if she underwent any bloodwork in March.

After Isaac sent follow up calls and emails asking to see a doctor, she finally secured an in-person appointment in April.

At least five weeks had passed since she first noticed issues with her platelets and had reached out to medical staff.

On April 17, Isaac was admitted into Montefiore Medical Center after learning her platelet count had dropped once again.

She sent out the heartbreaking tweet aimed at hospital staff that morning.

On April 20, Isaac discovered that day she developed HELLP syndrome, a serious condition of high blood pressure and low platelet count that can complicate pregnancy.

McIntyre said he was barred from being by her side during the C-section because doctors had administered general anesthetic.

'They wouldn’t let me hug or kiss her because I had masks and stuff on. So I told her I loved her and we were gonna get through this,' he said.

Nearby, McIntyre heard the sound of PA announcements calling doctors to report to the delivery room and staffers dashing around.

'As soon as they took the baby out, her heart stopped,' said McIntyre. 'And she bled out. Her platelet levels were so low that her blood was like water, so nothing was clotting.'

Baby Elias, who was born more than a month early, is doing well but still in the hospital.

'It’s very hard being in this home and imagining her here with us,' said McIntyre.

The family created a GoFundMe to cover the expenses for Elias's care and Isaac's funeral.

McIntyre said he and Isaac eventually wanted to open a daycare to serve low income families with limited options and income.

Isaac, who was studying business development at Concordia College, hoped to graduate in May.

'She was treated very unfairly and she died because of that,' he said.

The unfair treatment Isaac reportedly endured is indicative of a larger problem regarding black women and the health care system. 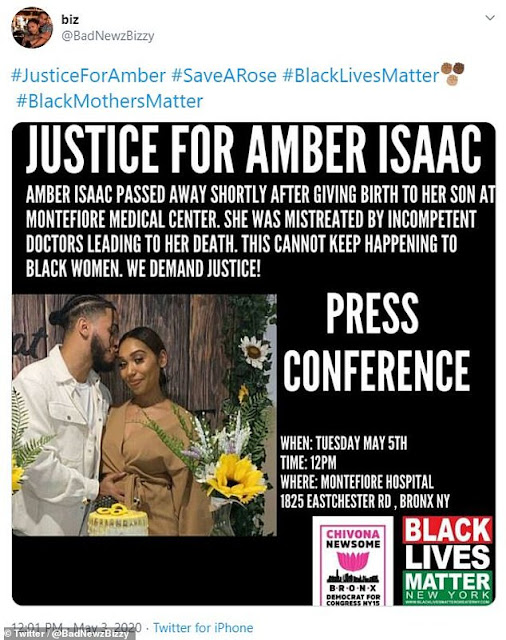