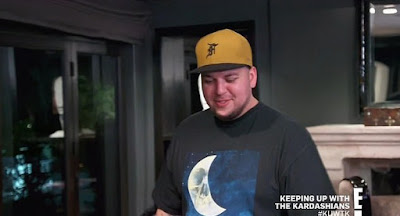 Rob Kardashian made a surprise appearance on Keeping Up With The Kardashians on Thursday as the family celebrated his daughter Dream's 3rd birthday.

The US reality star, 33, was joined by his loved ones during celebration, as mum Kris Jenner praised him for putting on such a 'cute' party for little Dream.

Rob's party comes as he continues to be in the midst of a custody battle with ex Blac Chyna, who has recently claimed she has proof that she never attacked him.

Rob was joined by his famous family to celebrate Dream's birthday with low-key celebration at their California home.


Kris praised her son for putting together the party, saying: 'I am so proud of Rob and what a cute party he gave for Dream.

'He wanted it to be so special, from the cake to the bubble guy, it was so special.'

Following the party, Rob chatted to sisters Khloe and Kim about Kris's boyfriend Corey Gamble's birthday party, which was scheduled to take place right after Dream's.

He has rarely been seen on Keeping Up With The Kardashians in recent years, as he continues to be in the midst of a custody battle with ex Chyna.

THURZ - Dancing In The Sun

MALIKA - Where I Wanna Be

MALIKA Where I Wanna Be MALIKA brings us this hot astonishing new song titled “Where I Wanna Be” and we uploaded it here for your free streaming and download. Listen ...

MALIKA - Can We Talk

MALIKA Can We Talk MALIKA brings us this hot astonishing new song titled “Can We Talk” and we uploaded it here for your free streaming and download. Listen & Download ...

Free Nollywood/Nigerian movie from Firstnollytv and this one is titled THE COMING SEASON 3{NEW HIT MOVIE} -DESTINY ETIKO|EVE ESIN|JERRY WILLIAMS|2020 Latest Nigerian Movie, brought to you by Wapbaze and uploaded ...

MALIKA - Are You That Somebody