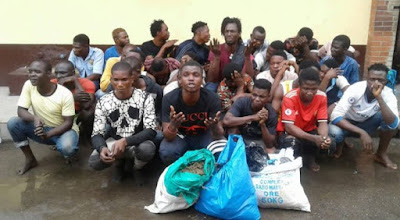 Operatives of the Lagos State Environmental and Special Offences Unit (Taskforce) at the weekend raided all streets within Central Business District, including surroundings of the ‘African Shrine’, Alausa, Ikeja and arrested 28 miscreants and 15 illegal street traders.

The Chairman of the Agency, CSP Olayinka Egbeyemi said the enforcement operations became imperative following complaints from members of the public about the criminal activities of miscreants and environmental nuisance of illegal street traders around the Shrine.

Egbeyemi disclosed that 28 miscreants and 15 illegal street traders were arrested at various locations around Alausa, hinting that the raid was also initiated due to the nefarious acts within the vicinity of the African Shrine which presented a negative image to tourists and Lagosians as a whole.


According to the Chairman, “The night enforcement operation was carried out on all roads around African Shrine where sales of hard drugs like Tramadol, Codeine, Skunk, Weed, Illegal Mixed Liquor, Assorted Food and all sorts of consumable and non-consumable items are freely sold on the streets in defiance of security agencies and government authority”.

Egbeyemi maintained that the enforcement operations would be a continuous exercise in line with the vision of the present administration to rid the entire State of street urchins and criminals.