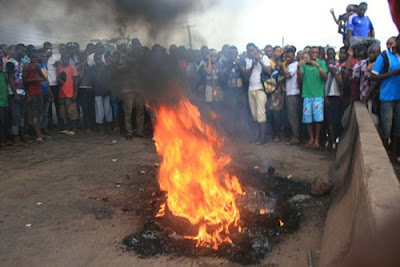 A suspected female kidnapper was lynched and set ablaze by angry mob at Offa Garage area of Ilorin on Monday. The woman had gone to fetch a set of twins from an Arabic school in Kilanko area of Ilorin.

The woman had approached the school on the pretext that their mother had asked her to pick up the twins from the school.

A source in the Arabic school, who pleaded anonymity, told newsmen that luck ran out of the suspected kidnapper when the twins’ mother was contacted and she denied sending anybody to pick up her children.

The source said the mother of the twins hurriedly came to the school and confronted the woman. She revealed that she did not send anybody to take custody of her twin.


An eye witness told pressmen that her outburst attracted passersby to the school where the suspect was still being held.

The eye witness said the passersby later pulled the suspected kidnapper out of the school premises and marched her to Offa Garage.

Reports said efforts by residents around the Arabic school to prevail on the mob to hand over the suspect to the police fell on deaf ears.

The suspected kidnapper was however lynched by the mob that set her on fire at about 11 a.m. At the scene of the crime, charred remains of the lynched woman were still lying on the road. When contacted, Kwara Police Public Relations Officer, Ajayi Okasanmi confirmed the incident.

He told pressmen on phone that the police were on the trail of persons responsible for the killing.
“Before we got the information, the deed had been done and as we speak, policemen are already there making efforts to arrest the culprits

. “I can assure you we are going to do just that because it is lawless for people to take life of another human no matter the offence,” Okasanmi said. The police spokesman, therefore, warned residents to desist from taking laws into their hands by not indulging in jungle justice.