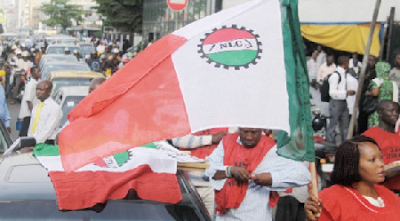 Armed persons on Sunday attacked the residence of the chairman of the Nigeria Labour Congress, Ebonyi State chapter, Leonard Nkah.

Armed persons on Sunday attacked the residence of the chairman of the Nigeria Labour Congress, Ebonyi State chapter, Leonard Nkah.

The house is at Mile 50 area of Abakaliki, the state capital.

The armed persons, said to be five, stormed the house on Sunday evening, ransacked the building and took away some valuables including undisclosed amount of cash.


Mr. Nkah in an interview with Premium Times confirmed the incident but noted that he was not around when the robbers struck.

“I was called by my wife around 9 p.m. that robbers came to our house and demanded for my whereabouts. They said they got information that there was money that was brought in and that they need the money. They forced her to lie down despite the fact that she was pregnant.

“They ransacked the house and took whatever they could find but they were disappointed that there was no such huge amount of money in my house.”

He lamented that the robbers physically attacked and abducted his wife and later dumped her in a bush.

“They assaulted my house help who opened the door when they came in, they also assaulted my wife and later abducted her. They beat her up while forcing her to lie down with her pregnancy which was difficult for her. They took her to other residents in the area where they also robbed before dumping her in the bush.”

“I thank God I wasn’t there, if I was there maybe it may have been a different story. They had information that I had huge sum of money. I was gathering resources to organise this reception for the governor today, maybe some people told them I have money.”

Mr. Nkah urged the police to beef up security in the state during the Christmas to check the activities of the criminals.