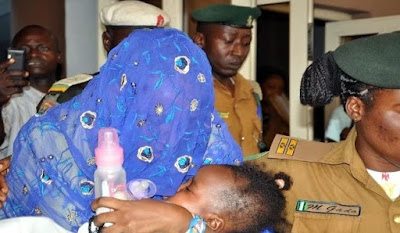 An Abuja Division of the Federal High Court has refused an application for bail by Maryam Sanda, daughter-in-law of former Peoples Democratic Party chairman.

Mrs. Sanda is facing trial on allegations of culpable homicide for the allegedly killing her husband, Biliyanu Bello, in November.

She is accused alongside her mother, Maimuna Aliyu; her brother Aliyu Sanda; and her house help, Sadiya Aminu. The others were alleged to have conspired with her.

Mrs. Sanda’s lawyer, Joseph Daudu, had asked the court to grant his client bail on the grounds that she (Maryam) had submitted a medical certificate showing that she was in need of health care which could not be provided at the detention facility.


Mr. Daudu cited section 161 (2) of the Administration of Criminal Justice Act, ACJA, which deals with exceptional cases and prayed the court to consider the health condition of the first defendant and her eight month old baby who would require constant motherly care.
The judge however granted the other defendants conditional bail.

“With respect to the other defendants, the offence with which they are charged is a bailable one. The learned counsel submitted that they brought themselves to court this morning. That they would not jump bail.

“The prosecution had submitted that they were granted administrational bail. But when the court prompted further, he said that they should be kept in custody.

“Bail is not meant to punish defendants,” the judge said adding that the three defendants would be granted bail with the following conditions: