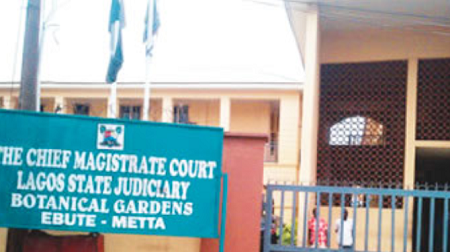 There was confusion at the Ebute Meta Magistrate’s Court on Wednesday after a man who pretended to be one of the kidnappers of the six pupils of Lagos Model College, Igbonla, was shot dead by a warder.

Punch Metro learnt that the suspect, Chizoba Okoye, was fleeing the court premises shortly after his case was adjourned till January 2018 when he was shot dead.

The corpse of the 24-year-old was said to have been taken into a prison ambulance and deposited in a morgue.


It had been reported that Okoye was first arraigned at the Chief Magistrate Oluwayemisi Adelaja’s court on August 3, 2017, on one count of false representation and demanding ransom.

The police prosecutor, Chinalu Uwadione, had told the court that Okoye, while presenting himself to be one of the kidnappers of the six pupils, demanded N2m ransom from their parents on June 11, around 8pm.

He had said the offence was punishable under Section 6 (iii) of the Lagos State Anti-Kidnapping Law, 2017.

Okoye was reported to have been brought to the court one more time before his case came up again on Wednesday.

A credible source told Punch Metro that after the matter was heard and the suspect was being taken to a cell in the court, he bolted.

He said, “Okoye was not involved in the actual kidnapping. He had heard about it like every other person and he decided to call the parents of the boys to demand N2m for their release. That was how he was arrested.

“This is the third time that he would be brought to court. The magistrate had adjourned his case till January 15, 2018. In fact, he was going to be freed on that day based on certain reasons.

“But he fled the court and the warder chased him to the police barracks beside the court. The man asked him to stop, but he refused and continued running. That was how he was shot dead. Operatives of the prison ambulance service confirmed him dead, after which he was taken away.”

The spokesperson for the prisons service, Lagos State Command, DSP Rotimi Oladokun, confirmed the incident, adding that the suspect was shot by men of the Armed Squad Unit.

He said, “It happened after the case was adjourned and the escort team was leading him to the holding cell on the court premises. Thinking he could escape the watchful eyes of the armed guards, Okoye suddenly took to his heels, defying verbal warnings and warning shots from the armed men.

“As he continued in his flight and attempted to scale the fence to freedom, he was immobilised by shots from the armed personnel and subsequently arrested. Unfortunately, he lost his life on the way to the hospital for medical attention.”

He said the state Controller of Prisons, Tunde Ladipo, had ordered investigation into the incident and assured the public of adequate security in all prison formations in the state.