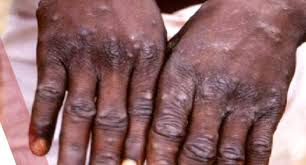 Benue State Commissioner for Health and Human Services, Dr. Cecilia Ojabo, has said that a 20-year-old corp member (names withheld) has been quarantined for exhibiting symptoms of monkey pox.

The commissioner who spoke with Punch correspondent on the update of the suspected victim of monkey pox discovered in Gboko early November said a corp member who was the victim’s lover also showed similar symptoms that led to his being quarantined.

She explained that the result of the blood samples of the Gboko victim of monkey pox was received a few days ago and tested positive to other viral infections.


While giving details of the possible area the victim contacted the monkey pox from, the commissioner said the victim’s lover, who was a driver from Lagos, had visited and slept with the lady before she showed the symptoms.

The commissioner further said that efforts to get the said lover driver apprehended were rebuffed, as he had returned to Lagos, while denying ever visiting Benue State.

“We have received the report of the blood samples of the suspected victim of monkey pox reported few weeks ago and it is positive with other viral infections.

“While we were doing contact tracing, we discovered that the victim had earlier slept with another lover who is a driver and who came from Lagos.

“We contacted the man on phone so that he would be connected to Lagos ministry of health, but he denied ever visiting Benue and other subsequent calls made to his line did not connect.”

The commissioner said the second case in Vandeikya area of the state that was reported was discovered to be measles.

She added that another case was reported of a young boy who attended school in Taraba State.

He also showed monkey pox symptoms,while his parents took him to a doctor. However, in the process of transferring him to Makurdi, the young boy disappeared and has not be seen since then.”