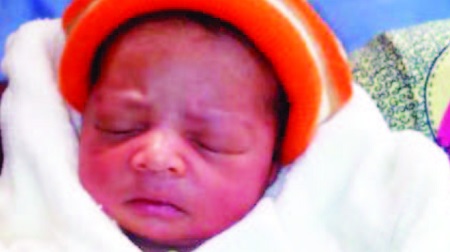 The joy of a Lagos family became tears after the death of their newborn baby at the Lagos University Teaching Hospital, Idi Araba, Surulere, Lagos, due to alleged negligence of some workers in the hospital.

The head of the family, Oliver Opara, told Punch correspondent that a private facility in the Egbeda area of the state, Crystal Specialist Hospital, where the baby was born, was also to blame.

However, he was said to have refused taking food, which created fear in the mother who called the attention of nurses to the problem.


The medical workers allegedly said all was well until Mrs. Opara’s mother, who visited the hospital, discovered that the baby had swallowed some  fluids during the delivery.

Within 48 hours of birth, the matter reportedly became complicated, as the hospital placed the child on oxygen and asked that he be transferred to LUTH in an ambulance.

However, the nurse assigned to the ambulance allegedly removed the oxygen mask while taking the child into the ambulance, a mistake that was not discovered until the party  got to LUTH.

The doctor who attended to them was reported to have insisted that the driver of the ambulance drove back to the hospital to bring back the oxygen mask.

The child was later admitted to an emergency ward, where electricity allegedly went off for more than one hour.

The baby was said to have died around 12am on Friday.

Mrs. Opara, who did not want her first name mentioned, said she had yet to recover from the shock of her son’s death.

She said, “I was delivered of the baby on Tuesday morning. Throughout that day, the child didn’t suck my breasts. He was only sleeping. Whenever I tried to feed him, he would do as if he wanted to vomit something that was in his stomach.

“My mother, who came for omugo (cultural practice of caring for new babies), visited late that night and I told her my child had not taken any food. She asked me to call in a nurse to check him.  The nurse tapped him and pushed my breast into his mouth, but he refused it.

“The next day, the hospital asked us to buy baby food; he still didn’t take it. My mum then said from her experience, it appeared the child swallowed  some fluids during delivery.

“I complained to the nurse again and told her my mum’s observation. She used an object to press the baby’s nose and some fluids came out. The baby was returned to me. He still didn’t eat.”

She said after a different set of nurses resumed duty, she became anxious.

She noted that efforts to make the baby eat didn’t work, adding that the struggle continued until 9pm on Wednesday when the child took some food after he was fed through a spoon.

The bereaved mother said by 12am on Thursday when her mother carried the baby, his stomach had become swollen.

Mrs. Opara said she raised the alarm and a paediatrician was called in to see the baby.

“The woman said we should stop trying to feed him. She placed him on a drip till Thursday morning. Suddenly, we saw his breathing became irregular and we called in a nurse, who called the doctor and before I knew it, there was confusion everywhere. I saw the nurses and doctors running helter-skelter. I started crying,” she added.

The boy’s father, Oliver, said his child’s condition became critical because the paediatrician did not see the baby on time.

He said the Chief Medical Director of the hospital told him to be at ease and that his child would be well.

He said, “He referred the baby to LUTH and asked a nurse to put him in an ambulance with oxygen which had become his source of life. Unfortunately, the nurse, who was in haste, removed the oxygen mask before she put him in the ambulance.

“When we got to the emergency unit at LUTH, a doctor who came to attend to us asked where the oxygen the boy was using to breathe was. That was when it dawned on us that the nurse had removed it.

“When the oxygen mask finally came, instead of LUTH to start the treatment immediately, they began the process of documentation. They asked us to buy all kinds of things before they started the treatment.”

He said after some time, his child was transferred to the ward where treatment started.

While on oxygen at the unit, power went off, Oliver said.

“They didn’t have a generator to power their equipment for more than one hour. I discovered that women who were just delivered of babies were accommodated in a place where you have to pay N2,100 for a space. I also had to pay to get a space for my wife.

“They conducted an x-ray and said my baby was alright. In fact, around 11pm, I saw the boy kicking and I started thinking my baby was getting better. By 12 midnight, I was called that my baby was dead,” he added.

Oliver insisted that both hospitals were to blame for his son’s death, wondering why it was his wife’s mother that discovered that his child swallowed fluids and why nothing was done on time to save the situation.

Adeyemi, while condoling with the Opara family on the death of their baby, said the hospital did its best to save the child.

He said, “We know the family very well; the mother went through our antenatal process. So, it’s not a case we didn’t know. From the day the baby was born, he had a respiratory distress, an infection. He was being managed by our in-house paediatrician and within 24 to 48 hours, the baby’s condition got worse. We had given him antibiotics and done everything we could do.

“So, we referred them to LUTH through a referral letter, stating the findings that we had, for further management. Our team followed up with phone calls, but unfortunately, we were told that the baby did not make it.

“We are a referral centre and we get a lot of referrals from small hospitals. Sometimes, we have some babies that come out with congenital disorders and instead of just rushing them out, we have a very good team on the ground, which manages the situation. When we see that there is the need for further management, like an intensive care unit management, we have a process of referral to LUTH with an ambulance and a nurse who accompanies the baby. That was what happened.”

When Punch correspondent asked about the allegations of the baby’s condition being discovered by the grandma and the removal of the oxygen, Adeyemi said, “That is completely incorrect. I was there myself. We have a consultant paediatrician on the ground.

“The paediatrician detected the problem almost immediately;this was documented. When patients come in, we usually try to carry them along during the treatment process, but at certain points, the treatment gets serious and we are fast. Maybe that was what they saw that made them to say an outsider discovered the problem.

“And nobody removed any oxygen. What usually happens is that when we refer a patient to LUTH, the hospital sometimes says it doesn’t have bed spaces; we then try to move the patient to another teaching hospital. While this is ongoing, full treatment is carried out in the ambulance. I don’t know where the allegations came from. They are not true. I was there and I facilitated the process myself.”

When Punch Metro contacted the Chief Medical Director of LUTH, Prof. Chris Bode, on November 27 and 28, he asked for the details of the victim and his parents, saying the hospital would investigate the claims and react.

However, by November 29, the CMD did not get back as promised, despite repeated calls.

Replying to a text message later sent by Punch correspondent, he said the hospital had decided not to react.

“By hospital policies, we do not divulge patients’ details without a formal complaint from the parties concerned as it will violate our sworn duty of confidentiality in matters of patients’ records. If you are interested in any such story, you may wish to bring the complainants and or a formal document on the issue,” the text message read.