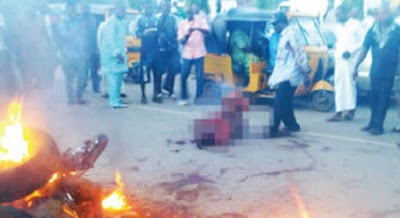 A suspected kidnapper was, yesterday, hacked to death by a mob, while another member of the group was beaten to stupor and his hand chopped off, before he was handed over to the Police.

The incident occurred along Mile 4 at Ikot Ansa in Calabar Municipality Local Government Area, Calabar. An eyewitness, Rosemary Uchechi, said the incident occurred at 7:30a.m. when a four-man kidnap gang tried to abduct two children along Parliamentary Extension Road, when they were being taken to school by their mother.

According to the eyewitness, “the mother to the children was on her way to drop her two kids at school before they (kidnappers) blocked her with their vehicle and abducted her children.


“In the process, one of the kids raised the alarm, which attracted passers-by and people in the area, who, alongside Federal Housing Police Division officers, went after the kidnappers.

“When they got to Mile 4, it was like they disappeared into thin air, not knowing they had entered a close. It was a brave lady that blocked them.

“The mob pounced on them and hacked the one that was holding a gun to death before setting him ablaze. The arm of a second suspect was cut off, with others escaping.”

Vanguard learned that the victims they tried to kidnap were family members of an oil worker living in Parliamentary area. Contacted, the state Police Public Relations Officer, ASP Irene Ugbo, confirmed the incident, adding that they have arrested one of the suspects, while others were still at large.

Her words: “We have arrested one, while the other was set ablaze by a mob. We also have the Nissan they used to carry out the operation and the suspect has been handed over to SARS for further interrogation. “We are working hard to apprehend other members of the group that escaped.”