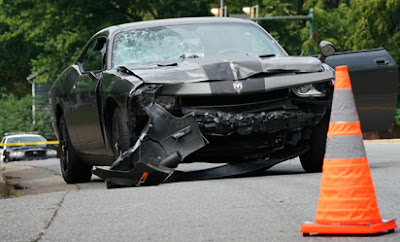 A woman identified as Obiageli Ezeanowiyi is currently being investigated by operatives of the Lagos State Police after she reportedly rammed into her fellow church member, killing her instantly.

It was learned that the accident occurred while Ezeanowiyi was driving and making a phone call at Jakande Estate junction at Oke-Afa, Isolo, close to St. Peters’ Catholic Church, where both of them worshipped.

An eyewitness told Vanguard on the condition of anonymity, that Ezeanowiyi lost control of the car and killed the victim, known as Madam Chichi, who was on her way to church.

The source said: “The deceased, who ran a popular ‘joint’ at Isolo, was going for Sunday Adoration Service when the incident happened.


“It was while at Jakande Junction, waiting to get a tricycle that will take her to the church that Mrs. Obiageli, who was driving her Nissan Pathfinder SUV, ran into her and killed her instantly.” Vanguard learned that the mother of three hailed from Mbano in Imo State.

Her remains have been taken to Isolo mortuary for autopsy report, while Obiageli has been detained after reporting herself to the Police.