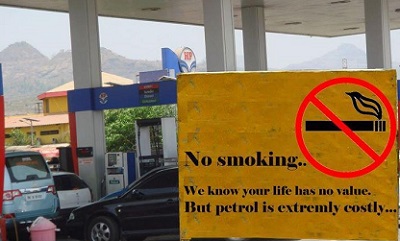 An unemployed man, Bala Lawal, who allegedly stabbed an attendant for stopping him from smoking in a petrol station, on Friday appeared before an Ikeja Magistrates’ Court.

The prosecutor, Sgt. Mike Unah, told the court that the accused stabbed Mr. Godwin Okonta on November 8 at Aguda, Ogba in Lagos, after smoking marijuana.

Unah said Okonta told Lawal to move away from the filling station while he was smoking, and that the accused later came back and stabbed him on the head with a knife.


Unah said witnesses consequently apprehended the accused. He noted that the offence contravened Section 173 of the Criminal Law of Lagos State, 2015.

The accused, however, pleaded ‘not guilty.’

The Magistrate, Mrs. A.O. Gbajumo, granted him bail in the sum of N200,000 with two sureties in like sum.

Gbajumo adjourned the case until December 4 for mention.