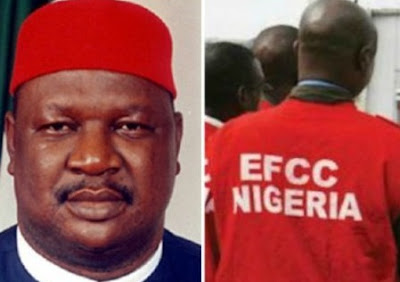 Former Secretary to the Government of the Federation, Anyim Pius Anyim, says he is still the custody of the Economic and Financial Crimes Commission, contrary to the impression being created that he has been released.

The EFCC arrested Anyim in connection with a sum of N520m, which he allegedly collected from ex-National Security Adviser, Sambo Dasuki, on the eve of the 2015 general election.

The EFCC said he is also investigating Anyim for alleged contract scam of N13bn. But in a statement on Friday by his lawyer, Chief Mike Ozekhome (SAN), he denied having been freed, saying he was not allowed to go despite the administrative bail.


In the said statement, titled, “Anyim is still in the EFCC Gulag, kept under inhuman and degrading conditions,” Ozekhome said the report of Anyim’s release was misleading.

He said, “The truth is that Anyim is still held in custody till this minute, in spite of fulfilling administrative bail conditions laid out for him, including deposit of his passport and being compelled, under duress and undue influence, to sign all manners of self-incriminating and property-stripping documents against his will.