Soldiers Chain Man To Motorcycle In Lagos, Drag Him On Street 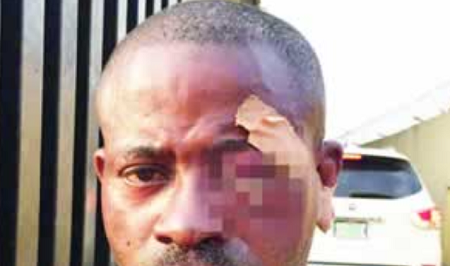 An electronics dealer in the Ikorodu area of Lagos State, Lukman Lambo, may have to undergo a surgery to regain the use of his left eye.

The injury was allegedly inflicted on him by soldiers, who also dragged him on the street.

It was said that the girlfriend of one of the soldiers had a disagreement with Lukman’s younger brother, Saheed Lambo.

Saheed and the lady, identified simply as Dasola, were neighbours on Itulubajo Lane, Alhaji Street, Ikorodu.


Punch Metro learnt that the duo were lovers, until a few weeks ago when a disagreement over money strained their relationship.

Punch correspondent gathered that some residents clashed around 11am on Saturday, November 11, in the house where Saheed lives.

It was said that Dasola went to watch the altercation.

Saheed was said to have rebuked her for poking her nose into a situation that did not concern her.

At about 5pm on that day, Dasola reportedly led her soldier boyfriend in company with three other soldiers to Saheed’s residence.

The soldiers did not meet Saheed at home, but they descended on his elder brother, Lukman, who was on a visit.

The victim told our correspondent that one of the soldiers believed to be Dasola’s boyfriend rained blows on his face.

He said he was handcuffed to a motorcycle while one of the soldiers rode the bike and dragged him on the street.

Lukman said the soldiers left him when blood started coming out from his eyes.

He said, “Where Saheed lives is our family house, but I don’t reside there. I went to the house and someone told me that Saheed had a fight with a lady who had gone to call soldiers to beat him up.

“The person added that the soldiers might kill him and I asked him why they would kill him, not knowing they were already behind me. They were four in number and three of them were in army uniform without tags.

“They beat me up and in the process, the one that is befriending the lady hit me on the face. They handcuffed me to a motorcycle and dragged me on the street.

“People begged them to leave me, but they refused. They should be from Odogunyan barracks. I can identify them if I see them.

“Doctors at the Ikorodu General Hospital, where I was admitted, said I might have to undergo a surgery. I have spent a lot of money on the eye.”

Punch correspondent learnt that the case was reported at the Igbogbo Police Station and Dasola had been arrested.

Saheed explained that a week before the incident, he had taken Dasola to an inn in the community.

Saheed said, “She later collected the N1,500, but tore my clothes. Afterwards, she would abuse me whenever she saw me. On Saturday, November 11, my friends fought in our compound and she came. I told her she was nosy.

“We abused each other and she left and later came back with the soldiers to intimidate me.”

He said, “Investigations commenced after the case was reported. The lady was arrested for conspiring with the soldiers to assault the man. He was taken to a hospital for treatment.

“The Divisional Police Officer found out that the suspects were from an army barracks. We have to write to the Nigerian Army to report their conduct and get them identified so that they could be brought to book.”