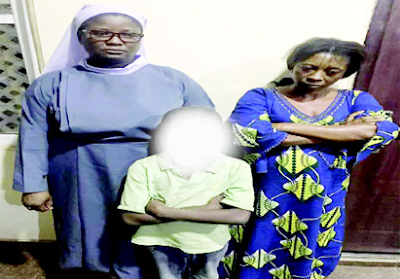 A 44-year-old Reverend Sister Chime Geraldine has been arrested by operatives of the Inspector General of Police Special Intelligence Response Team, IRT, for allegedly trafficking two young boys who were kidnapped between January and April 2017.

Saturday Vanguard gathered that the Revered Sister, who was attached to the Catholic Archdiocese of Abuja and operated an orphanage home known as Oblek Foundation Orphanage Home, at Gwagalada Abuja, was arrested alongside her 35-years-old accomplice, Obie Okoro, who was said to be a member of a kidnap syndicate and supplied the kidnapped young boys to the Reverend sister.

Sources disclosed that the IRT, led by ACP Abba Kyari, delved into the matter when it received an intelligence report about the syndicate which specialized in kidnapping children from churches across the South Eastern Part of the country and would then sell them to the Reverend sister for N500,000, who would in turn resell them to people who were in need of children.


Following the information, Saturday Vanguard gathered that Okoro was trailed to Lagos by the IRT operatives, where she was arrested and interrogated. She was said to have confessed that she sold two young boys who were between the ages of 6 and 7 years to the Revered sister, and that the children were kidnapped from their churches in Norkwa and Nnewi area of Anambra State by the son of their pastor identified as Nnana.

Following her confessions, the operatives took Okoro to the Gwagalada home of the Revered sister where one of the kidnapped young boys, Daberechi Ameke, was rescued while the sister was arrested. She also led the operatives to Monkey Village area of Lagos, where the other boy, Chinnonso Eze was rescued.

Parents of the victims, James Eze and Veronica Ameke, told Vanguard that they were members of the Assembly of God Church in Anambra State and their children were kidnapped by their pastor’s son.

According to Ameke: “I took Daberechi to a vigil in my church, the Assembly of God Church, at Nnokwa in Idemili Local Government. I started looking for him around 8 pm before the commencement of the vigil but we didn’t see him. We also went to Nnobi police station to report the incident We searched for him everywhere but could not find him and we kept on praying. I have five children, Deberechi was my last child. Then, on September 29, 2017, the police in Awka arrested some people who specialized in kidnapping children and when they were interrogated they confessed and they identified the son of my pastor known as Nnana as their leader. He escaped after his gang members were apprehended while the police went after his father. Happily, I received a call from one of my church members that Deberechi had been found by the police in Abuja and I came to receive him from the police. My son told me that it was the pastor’s son who took him out from the church and handed him over to someone who he didn’t know who then brought him to Abuja.”

Meanwhile, when Vanguard interviewed Reverend Sister Geraldine and her accomplice, she denied knowing that the young boys who were bought to her were kidnapped. She explained that the woman who brought the boys deceived her that the children had no parents and they were from an orphanage home in the South East and that the money she paid for them was the amount demanded by the operator of that orphanage.