Morrisons Supermarket Manager Hangs Self Over Addiction To Gambling 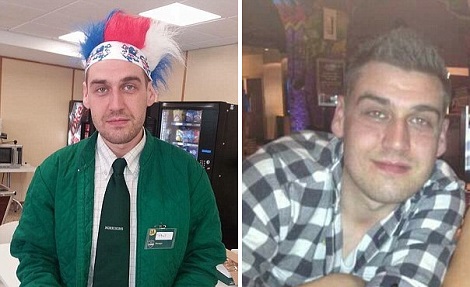 A Morrisons supermarket manager hanged himself after he became overwhelmed by a 'punishing' addiction to online gambling.

Philip Tomlinson, 29, would squander up to £1,000 a time playing betting machines and became so hooked on his habit he sold his expensive set of golf clubs to help fund it.

His girlfriend also left him when he frittered away cash at the bookies which had been earmarked for a trip for them to see the Northern Lights together.

Last July 11 amid mounting debts, Mr Tomlinson penned a note saying 'I am sorry for gambling, it was my biggest regret' before taking his own life at a beauty spot.


He was found hanged from a tree in secluded woodland by a dog walker in Monton, near Eccles, Greater Manchester less than an hour after his worried mother issued a missing person's appeal

'This is a case where the message should go out that gambling is as punishing and fatal as other addictions and can bring nothing but misery and tragically, death.

'Phillip was known to be a long term gambling addict and the preparation, the location that was selected and together with the information in those letters leave me in no doubt he wanted to end his life.

'Philip's death was a tragedy and nobody can begin to comprehend the grief of a mother whose son has died before their time.'

Earlier the inquest heard Mr Tomlinson, who worked as a pricing manager for the supermarket giant, had starting playing slot machines before moving on to online forms of gambling using his iPhone or tablet.