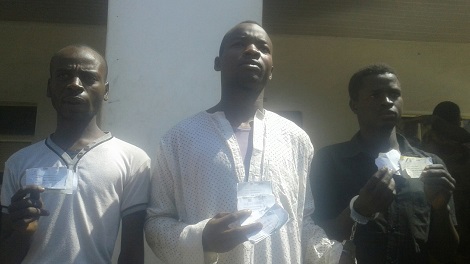 The police said seven children were rescued from the suspects. Parading the suspects before journalists, the police spokesperson in the state, Magaji Majia, said the suspects were demanding payment of ransoms with recharge cards.

He said the while the suspects were negotiating ransoms with parents, they would take kidnapped children to distant communities such as Gwarzo and deliver them to ward or village heads as missing children.

“They will continue to put pressure on the parents to submit the ransom, which usually turned out to be in recharge cards of various network providers.


“So far, four parents had submitted to the demand and sent recharge cards worth hundreds of thousands of Naira for the release of their wards,” he said.

One GSM phone, three SIMs and redeemed recharge cards were also recovered from the suspects, he said.

One of the suspects, Khalifa Usman, said they were sending their victims to ward heads because they did not have a place to keep the children and they did not want them to suffer.

“When we kidnapped a child, we normally took him to ward head’s house in a far away area, then call his father and demand payment. If he asked for mode of payment, we then told him to send recharge cards of the amount demanded,” he said.