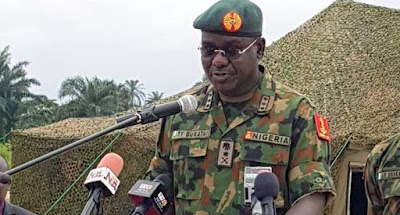 A Nigerian Army captain who led an emergency response team was killed in Adamawa State on Sunday, gunned down by a fellow soldier who subsequently took his own life, Premium Times has learnt.

The exact location of the shooting remained unclear on Saturday night but one military insider said it happened in Madagali, Adamawa State.

Our sourced said a report of the incident has been filed by the Nigerian Army 28 Brigade Headquaters in Mubi, Adamawa State, to the 7 Division Headquarters in Maiduguri, Borno State.

Those familiar with the incident said Army captain, T. Mani, was on Sunday morning patrol with other officers when they responded to a distress call that Silas Ninyo, a staff sergeant, was beating civilians at a nearby location.


Upon arrival, Mr. Mani and his team members prevailed on Mr. Ninyo and rescued the civilians from him; but the situation quickly turned fatal when the service men tried to disarm their raging colleague.

The incident occurred at about 12:50 p.m. and the remains of the two soldiers were later deposited at Brigade Medical Centre in Yola, the state capital.

All officers around the brigade have been warned to be on the alert as whole-scale investigation of the incident continued.