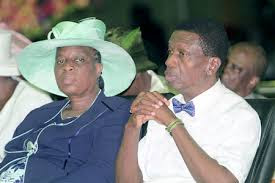 The General Overseer (Worldwide) of the Redeemed Christian Church of God, Pastor Enoch Adeboye; and his wife, Folu, have rehabilitated no fewer than 2000 drugs addicts in the country.

The couple reportedly achieved the feat within the 27 years of founding the Christ Against Drug Abuse Ministry (CADAM), a project that sought the rehabilitation of drug addicts in the country.

During the inauguration of another initiative of CADAM, the Enoch and Folu Adeboye Rehabilitation Centre at Araga, Epe, Lagos State, beneficiaries of the project recounted their experience.

One of them, Mr. Ilimezekhe Salvage, an indigene of Rivers State, who graduated from a university after rehabilitation, said he was saved from addiction to cocaine, heroin, marijuana and other illicit substances.


“God used this initiative to save my life from drug abuse. Since I came across CADAM, my life has received positive transformation,” he added.

Adeboye’s wife, Folu, said the centre was for the transformation for youths who suffered substance abuse and were seeking new lives.

According to her, CADAM which started its journey in 1991 has treated about 2,000 beneficiaries with about 70 per cent of them living drug-free, independent and productive lives.

“Today, we have both formal and informal relationships with about 12 Nigerian universities that send their students to us for the programme and readmit them to complete their education upon our certification,”, she said.

The Governor Lagos State, Akinwunmi Ambode, who was at the inauguration of the new centre, noted that the initiative would go a long way in complementing efforts of the state government to eradicate crime.

The Head of CADAM, Pastor Brown Oyitso, lamented that substance abuse had become a scourge in the society.

Oyitso, who doubles as Pastor-in-Charge of Region 19, and Personal Assistant, Missions, to the General Overseer, said CADAM had been involved in CSR since Adeboye instructed pastors of the church to give back to society.