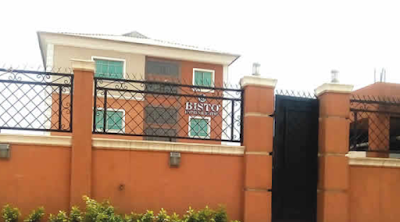 A security guard at a hotel on Awolowo Way, Itamaga, Ikorodu, Lagos State, Joshua Jonathan, has been arrested for murder.

Jonathan allegedly stabbed one Ayo Ibrahim, another guard at the facility –Bisto Hotel and Suites – during an altercation.

Punch Metro learnt that the 45-year-old victim was taken to the Ikorodu General Hospital, where he was pronounced dead.

The suspect was said to have been arrested by the Igbogbo Police Division. When Punch correspondent visited the area, an artisan who spoke on condition of anonymity said people became aware of the incident when Ibrahim was rushed out of the hotel.


He said, “I was attending to a customer at about 12pmn on Friday, October 24, when the security man (Ibrahim) was rushed out of the hotel. He was bleeding from the chest. He was put in a car and taken to the general hospital.

“I learnt that there was an issue between him and the other security guard, but I don’t know what actually led to the disagreement. The man later died in the hospital.”

A resident, who identified himself only as Festus, explained that the hotel management had tried to keep the details of the incident away from people, adding that workers at the hotel were silent as well.

He said, “I was in the office when the incident happened. I knew about it when I came back home that day in the evening. The suspect has been arrested. It is only the management that can tell you what transpired between the two security guards.”

When Punch correspondent approached a security guard at the hotel, he was told that the managing director, who could speak on the matter, was not on the ground.

The guard, who gave his name simply as Nduka, said, “The managing director is not around and I am not aware of the incident.”

A man, who said he was a cleaner in the hotel, said, “The manager is not around and I don’t have his phone number. If you want to get information, you have to get in touch with our lawyer.”

The man did not provide the lawyer’s contact when requested.

Punch  correspondent gave his phone number and name to Nduka, but had yet to receive a call from the management as of the time of going to press on Wednesday.

Calls made to Nduka’s line also indicated that it was switched off.

Famous-Cole, an Assistant Superintendent of Police, stated that the corpse of the deceased had been deposited at the general hospital mortuary for autopsy.

He said, “The suspect allegedly stabbed the deceased during an altercation. He was rushed to the hospital for treatment, but eventually died there. The suspect has been arrested and investigation is ongoing.”