Metuh: Testifying Will Expose Me To Criminal Trial – Goodluck Jonathan 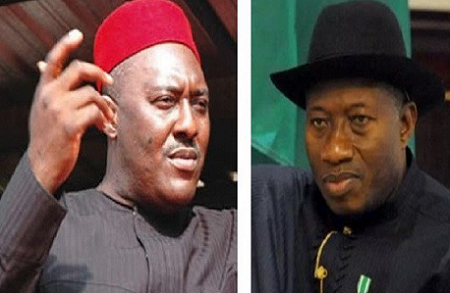 An application filed by former President Goodluck Jonathan before the Federal High Court in Abuja has revealed further reasons why he wants to be excused from appearing as a witness in defence of a former National Publicity Secretary of the Peoples Democratic Party, Olisa Metuh.

Metuh is standing trial on charges involving, among others, the N400m he (Metuh) received from the Office of the National Security Adviser in 2014.

The former President in his motion challenging the subpoena issued on him, stated that with “with several attempts by some persons in the current dispensation, to harass, intimidate and rubbish” his reputation and that of his wife, the witness summon issued on him upon Metuh’s request was a ploy to drag his name in the mud.


He also argued in the motion filed on his behalf by his lawyer, Chief Mike Ozekhome (SAN), on Monday,  that his testimony being sought in Metuh’s trial, would not only amount to an invasion of his right to privacy, it would also expose him to a criminal charge, penalty or forfeiture.

He recalled that there had been attempts to seize the properties and bank accounts of his wife, Patience, her relatives and her pet non-governmental organisation.

These are contained in an affidavit, filed in support of the motion filed on behalf of Jonathan by Ozekhome on Monday, seeking an order to set aside the subpoena ordering him to appear in court as Metuh’s witness.

As an alternative prayer, the motion sought an order directing Metuh to deposit with the court for Jonathan, the sum of N1bn to cover travelling expenses for himself and his security personnel from his home town, Otuoke in Bayelsa State, to Abuja.

A litigation secretary in Ozekhome’s law firm, Mr. Usman Salihu, who deposed to the affidavit filed in support of the motion, said he spoke with Jonathan through a phone call in the presence of the lead counsel, Ozekhome, at about 10am on October 29 (Sunday).

Salihu stated in the affidavit that although Jonathan had not been served with the subpoena, he but had read about it in the media.

He stated that Jonathan was shocked on learning of the witness summon issued against him at Metuh’s behest.

He also denied knowing anything about the charges preferred against Metuh by the EFCC.

Salihu stated, “That he (Jonathan) has read in the media of a witness summons issued by this honourable court requiring him to come. before the court for the purpose of testifying before the court, in charge No: FHC/ABJ/CR/05/2016.

“That there have been several attempts by some persons in the current dispensation to harass, intimidate and rubbish his reputation and that of his wife.

“That several attempts have been made to attach or seize the accounts and properties of his wife, her relatives and her pet, NGO. Most of the cases filed for and against such moves are currently pending before various courts across Nigeria.

“That when he read about the summons issued on him at the behest of the 2nd respondent, Olisa Metuh, he was shocked as he verily believes strongly that it forms part of the ploy to drag his name into the mire.

“That he knows nothing pertaining to the seven counts for which Olisa Metuh, the first defendant in the charge is standing trial and consequently, has absolutely nothing to say as a witness before the court in respect thereof.

“That he verily believes that the evidence sought to be obtained from him will amount to an invasion of his personal right to privacy and family life, as guaranteed by the Nigerian constitution.

“That he verily believes that the evidence sought from him, is likely to expose him to a criminal charge, penalty or forfeiture.”

He further argued that the subpoena was vague and applied for and obtained on frivolous grounds.

Salihu added that the subpoena was obtained in bad faith as it was meant to embarrass the person of the applicant.

He argued that Metuh was not a personal aide or an appointee of the applicant herein and so could not have dealt with the President directly under any circumstance to warrant the invitation of the applicant to testify in the charge.

Salihu also submitted that there was no nexus between the applicant and Metuh and the charge for which Metuh was standing trial.

He also said he knew nothing about the charges preferred against Metuh.