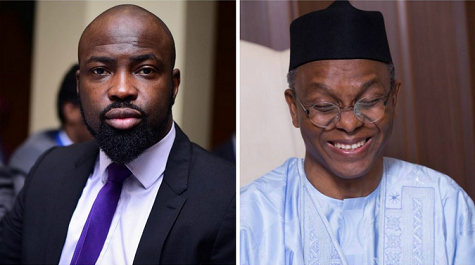 The court directed that the respondents should pay the money to the plaintiff as compensation and general damages, jointly and severally.


Maikori had in his suit marked FHC/ABJ/CS/385/17, prayed the court to award N21billion to him as damages. He challenged his arrest and detention by the police over a message he passed through his tweeter handle. It will be recalled that Maikori was first arrested in Lagos on February 17, 2017 and detained for 24 hours in Abuja for allegedly posting “inciting” materials on the Internet. The plaintiff had in the said tweet, alleged that some Southern Kaduna students were killed by Fulani herdsmen. The tweet infuriated Governor El-Rufai who vowed to prosecute Maikori for peddling falsehood he said was capable of worsening the security situation in Kaduna state.

However, Maikori later apologised to the governor, saying he was misinformed by his driver. He was subsequently arrested, allegedly on the order of governor El Rufai.

Dissatisfied with the way he was treated, the plaintiff approached the court for a redress. Out of 25 reliefs he sought before the court, only 14 were granted.

In his judgment, Justice Tsoho ordered the respondents, jointly and severally, to pay the applicant the sum of N10m only as compensation for the violations of the applicant’s right to personal liberty as enunciated in Section 35(6) of the 1999 Constitution for the loss of his business earnings while in detention.

The court also ordered the respondents to pay jointly and severally, as general damages, the sum of N10m only for injury to character, self-reputation, business reputation, esteem, proper feeling of pride of the applicant, his staff? management and the applicant’s other international business concerns.

Besides, Justice Tsoho directed the respondents to pay damages in the sum of N20m only for injury to health, for medical bills being incurred by the applicant in treating himself and for psychological damage done on the applicant.

He further awarded N1,430 as cost of the suit, as well as, 10% interest per annum on damages until total and final liquidation of same. The Judge however noted that following the tweet on the social media, Maikori made himself liable to be arrested, even though he realised that he was misinformed by his driver.

He said: “I hold the respectful view that by virtue of his act, the applicant made himself liable to be deprived of his personal liberty” the court stated. Justice Tsoho further stressed that an arrest made by the police upon reasonable suspicion of commission of a crime is lawful.

He said the judgment went in favour of the applicant in view of the fact that the police, in carrying out its duty, violated Maikori’s fundamental rights.

“This judgement is without prejudice to offences that the applicant is standing trial for.

“The judgement will serve as a lesson to law enforcement agencies, they should discharge their duties in accordance with constitutional requirements, and not discharging their duties with impunity”, he held.

Justice Tsoho said though citizen have a right under the constitution to express themselves, he said such right should not be abused through the social media.

“Social media cannot be without social responsibility. It would amount to an invitation to anarchy to say that the cyber space is beyond control”.

He observed that it was for the purpose of control and regulation of the social media that the Federal Government enacted the Cyber Crime Act.

Maikori was arrested in Lagos on February 19, 2017, based on an arrest warrant that endorsed by a Kaduna State Magistrate court.

Justice Tsoho however declared the arrest warrant invalid on the premise that it was not endorsed by a court in Lagos before the arrest was effected.

“The arrest was improper, illegal and unlawful and by implication, the applicant was wrongfully and unlawfully arrested and detained for 48 hours.

“By dint of failure to make lawful arrest, the 2nd respondent infringed on the right to liberty, freedom, movement of the applicant. The court agreed with submissions by Maikori’s lawyer that the applicant was arrested and detained even when the police was aware of his respiratory health challenge.

“By virtue of exhibit 3 (medical report) an affidavit evidence, the police was made aware of the health challenge of the applicant. This fact was not controverted by all the respondents.

“The attitude of the respondents threatened the applicant’s right to life. Right to life and human liberty includes right to human dignity and other things that make life worth living.

“This court found and held that the conduct of Police infringed on the applicant’s right to life, liberty, dignity, freedom, movement as enshrined in Sections 34, 35, 40 and 43 of the Constitution”, Justice Tsoho held.