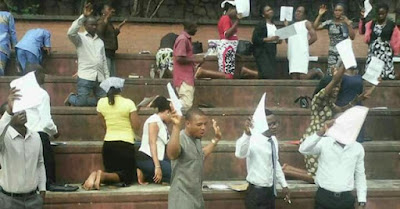 The Nigeria Union of Teachers, Zaria Local Government Area Branch, will on Tuesday begin three days of fasting and prayers to seek God’s intervention on the planned sack of 20,000 primary school teachers.

Kaduna State Government had conducted an examination for primary school teachers in the state and said 68 per cent of the teachers did not pass the primary four pupils’ exam at excellent level.

The NUT Chairman in Zaria Local Government Area, Malam Yahaya Abbas, said on Monday that the teachers were compelled to seek God’s intervention over the planned sack.


Abbas said, “Majority of our members here are Muslims and we do not have anywhere to lodge our complaint except to our creator.

“Therefore, we intend to start a three-day fasting on Oct. 17, in addition to prayers, to seek God’s intervention on the planned mass sack of our members whom government said did not pass its examination.

“There is no way for everybody to score “A” grade in an examination; that is 75 per cent, this is not what was agreed with the union representatives.

“The agreement was that the pass mark should be 60 per cent not 75 per cent. Again, the result of the examination is not yet out but the government said it will sack 20,000 teachers.”

He said that the government still owed some teachers salary arrears of between three months and 13 months, while some of them were being underpaid.

According to him, the primary schools across the state are understaffed, hence, the need for government to recruit more teachers instead of sacking the existing ones.

“I can assure you that there is one female teacher who teaches 200 pupils in a class due to the shortage of teaching staff.

“Again, sacking of experienced teachers and recruiting new ones is not the solution because anybody who bagged a National Certificate in Education or degree in the last 10 years must have been taught by these categories of teachers.

“Therefore, if the government argued that the present calibre of teachers are not qualified, then, how do you expect their products to be better than the teachers?”, he asked.