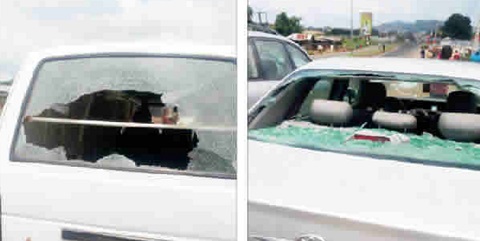 Tension arose in Ado Ekiti on Tuesday as members of the National Union of Road Transport Workers protested against the arraignment of a driver, Ahmed Kolo, before a Magistrate’s Court in Ado Ekiti.

Kolo, 35, was arraigned on September 26 for allegedly attempting to murder Governor Ayodele Fayose on September 24 on Ijigbo Street, Ado-Ekiti.

According to the prosecutor, Monica Ikebuilo, the accused, on the said date, unlawfully attempted to murder Fayose by hitting him with his car.

The offence was said to have contravened Section 320 of the Criminal Code, Cap C 16, Law of Ekiti State, 2008.


The drivers said they were angry that the government still went ahead to prosecute Kolo despite their plea to the governor for mercy.

The protest, which began as a peaceful procession on Monday at the Ajilosun area, turned violent on Tuesday as the driver unleashed mayhem on motorists travelling to and from Akure, capital of Ondo State.

The situation caused gridlock along the road as many motorists were stranded for several hours.

The irate commercial vehicle operators made bonfires on Okeyinmi-Ijigbo-Ajilosun Road, which created panic in the area.

There were sounds of gunshots in the air as police deployed their men in the scene.

One of the drivers, who spoke on condition of anonymity, said one of them was shot at Ajilosun, close to Fayose Market.

“There is no way we won’t revenge the killing. We are going to burn down a police station if that boy dies.”

He, however, refused to disclose the identity and the hospital the victim was taken to for treatment.

The drivers descended on passengers caught in the protest and damaged vehicles parked by the roadsides.

During the protest, the drivers brandished weapons like broken bottles, cutlasses, axes and charms as they hurled stones at riot policemen, who were deployed in the area.

Traders at the popular Erekesan Market and adjoining streets scampered for safety as sounds of gunshots rent the air.

Speaking on the protest, the Secretary to the State Government, Dr Modupe Alade, said the driver was rude to the governor and refused to apologise to him after he was arrested.

“The driver drove recklessly and was arrested. Rather than apologising, he was rude to the governor.

“The governor asked the drivers to come and apologise, but they refused.

“The governor is a no-nonsense person and won’t tolerate any threat from anybody. Until he apologised, he won’t be released,” she said.

“Let me make it clear, nobody was shot by our men and we have not arrested anybody in connection with the protest.

“We are in dialogue with the leadership of the drivers union and we are sure that the matter will be resolved soon.”