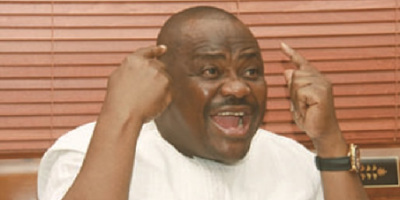 The Rivers State Governor, Nyesom Wike, says he is ready to lay down his life if it will ensure victory for the Peoples Democratic Party in the 2019 general elections.

Wike said this in the latest issue of ‘The Interview,’ a monthly magazine.

The governor said one of the reasons the then President, Goodluck Jonathan, lost the presidential election was that he was surrounded by insincere people, especially ministers.

He, however, said Rivers State fought tooth and nail to ensure victory for the PDP in 2015 and 2019 would not be any different.


Wike said, “The whole thing boils down to sincerity and commitment and sincerity. We said if things would not happen, all of us would go down with it. That was the driving spirit for us and that is what we are going to repeat in 2019.

“If the Federal Government is going to kill all of us, so be it. Because we know what they have planned and their strategies and so when it is time, we will face the APC squarely in this state. Just watch.”

The governor described Jonathan as a gentleman who condoned too many things.

Wike said for instance, when Jonathan went to campaign in the North, he was stoned in a number of states but did nothing.

The governor said if he were the President, things would have been different.

He added, “God gave every leader his strength and way of doing things. You see, I will not accept that. Let the heavens fall. If Nigeria was going to end on that day, let it end. I will not take what he took. That is why I respect the man a lot. I will not take that.

“If Nigeria will come down that day, let it come down. I mean, what is it? He was President and you were throwing stones at him? No single respect for that office? And you tell me to accept it? No, I will clamp down on you.”

Wike said the fact that those who stoned Jonathan were neither arrested nor prosecuted, showed that some northern elements, including the ones in the PDP, sabotaged Jonathan’s campaign.

SAINt JHN Roses (Remix) SAINt JHN comes through with the remix of his song titled “Roses” featuring Future and we uploaded it here for your free streaming and download. Listen ...

Smokepurpp & Ronny J - It's Whatever

Quinn XCII Ft. Logic - A Letter To My Younger Self

GASHI Paranoid GASHI brings us this hot astonishing new song titled “Paranoid” and we uploaded it here for your free streaming and download. Listen & Download GASHI – Paranoid Below: ...