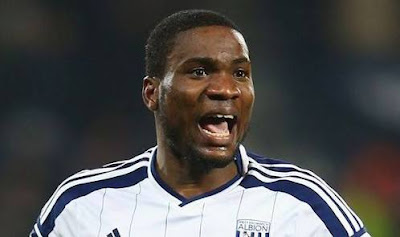 Nigeria International forward Brown Ideye has been ordered by a Switzerland based court to pay $225,000 approximately ₦82million as child support for his son he fathered when he was based in Switzerland playing for Neuchatel xamax FC.
Brown ideye was alleged to have had a fling with Francisca Errol who is the mother of the child when she worked as a secretary with the football club.
The son who is now six years old is still in the custody of Francisca Errol.
According to The Sun, Ideye was served the papers by the court when he was still playing for West Brom in the English Premier League but ignored the order and did not even appeal.
It's a big shame that a personality like Brown who represents Nigeria, will choose to abandon his own blood and disrespect court rulings, an angry Francisca Errol said.
Brown Ideye played for Swiss club Neuchatel xamax FC from 2007-2009, scoring 25 goals in 55 appearance.
He currently plays for Tiajin Teda in the Chinese Premier League. But Francisca says she will make him obey the court.