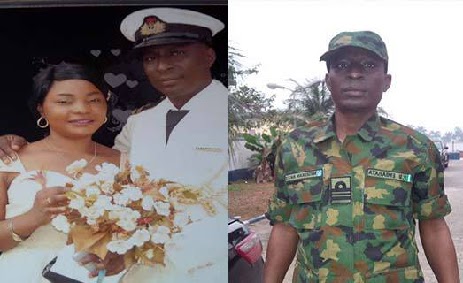 Two groups, The Women Arise For Change and Campaign For Democracy are demanding  justice for Mrs Titilayo Emiabata, in a case between the Commissioner of Police, Ogun State vs Mrs. Titilayo Emiabata which will come up tomorrow, Thursday,  21st September, 2017 at the Chief Magistrate Court in Ago-Iwoye, Ogun State. Actually, her husband a Naval officer got her arrested.

A statement signed by Dr. Joe Okei-Odumakin and Deacon Obatungashe Adebayo after the cut....


”The husband to the accused person and nominal complainant in the case is a Naval officer who is currently serving at Barrack Maintainance Unit, Port Harcourt by name Lt. Cdr. Kazeem Owolabi Emiabata, deliberately infected his legally married wife Titilayo with HIV and threw her out of their matrimonial home after she discovered his anti-retroviral drugs and medical records, which showed that he had been on treatment for a long period without disclosing his status to her.

She confronted him and later told her parents about her predicament when she got tested and her result came out positive.

Lt. Cdr. Emiabata had threatened to deal with his now estranged wife if she exposed his HIV status and has vowed to use the Police and other means to “kill Titilayo before HIV/AIDS kills him”.

It is on this note that the Women Arise for Change and the Campaign for Democracy demand that justice should be done in the case.

Rejecting the treatment meted out to Mrs Titilayo Emiabata by her Naval officer husband, in connivance with the Divisional Police Officer of Ago-Iwoye in Ogun State, the group commended a Lagos-based human rights lawyer, Mr. Inibehe Effiong who is representing Titilayo in the case for his determination to defend her pro bono and bring her husband to book.

The groups also saluted the courage of Mrs. Titilayo who has decided to speak out publicly about her travails and status for the sake of other vulnerable members of the society, particularly oppressed women.

The groups therefore call on gender rights advocates, human rights activists and the media to show solidarity with Mrs. Titilayo in court believing that Injury to one, is injury to all.