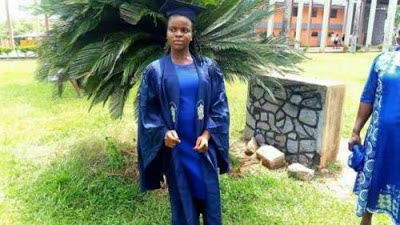 After 11 days in kidnappers’ den, 18-year-old Mary Olaniyan, a student of the Adeyemi College of Education, Ondo, has a lot to be thankful for.

According her, if not for divine intervention, she might have become a human to be carved up as body parts for ritual killers.

The young lady narrated her miraculous escape from a forest she found herself after she became unconscious in a cab she boarded in front of the school gate on September 1, 2017.

The year one student, who lives outside the campus, said after finishing lectures on campus that day, she was heading home when she boarded the kidnappers’ vehicle at about 6.30pm outside the main gate of the college along the Ondo-Ore highway.


According to her, four men were already seated in the vehicle painted in Ondo State taxi colours.

Olaniyan said, “I boarded the taxi alongside a lady at the same location and two other men. The two of the men were going to Yaba in Ondo town.

“As soon as I boarded the vehicle I became unconscious and by the time I regained my consciousness, I found myself in a building located inside a thick forest. I didn’t know the exact town where the forest is located but it is a very thick forest.

“I discovered that there were two guys and three ladies that had already been kidnapped and kept inside the building in the forest. The three men that kidnapped us were there  too.”

Her 11 days in the forest was an experience she said she could only describe as hell.

Looking conspicuously emaciated and frail, Olaniyan, is still shaken, days after her escape.

She shed tears as she narrated that she drank only water for the 11 days she spent in the captivity.

“The men did not give us food for the time we were there, they were giving us only water,” she said.

Olaniyan did not describe her abductors as mere kidnappers who kidnap for ransom.

She explained that it became clear that they dealt in human parts.

She narrated that they killed their victims and sold their body parts to “big men” customers many of whom she saw visiting the camp in expensive cars.

“I saw strange men coming in big vehicles to collect some things in cellophane bags. I knew it had to be human flesh,” she said.

On how she escaped from the hands of her captors, Olaniyan described her freedom as divine, saying she escaped while they (captors) were quarrelling with one another. She said she used the opportunity of the fight of her abductors to escape, alongside other victims, into the bush.

“Fight broke out among the kidnappers over money. The money was given to them by one of their customers, who came and left with something they put in a cellophane bag too.

“They did not watch us as they fought. That was when we used the opportunity to run out of the building in the forest.” Olaniyan stated.

She said she trekked for three days in the forest until she got to Ile-Oluji-Ipetu Ijesa Road, where she met a lady on the road and asked for directions to Ondo town.

Olaniyan was then told that she was close to Ile-Oluji. Soon after trekking along the road, she explained that she got to Igbo Oja village near Ondo where she made efforts to reach her mother on the mobile phone she begged to use from a resident.

Since the abduction of Olaniyan, two other students of the college – Blessing Oladepo and Mary Oluwasemilore – have been declared missing after they were suspected to have been kidnapped.

A  few days ago, some of the kidnappers,who were arrested by the men of the Ondo State Police Command, confessed to be behind abduction of the female students of the institution.

However, Olaniyan in her own case was lucky to have escaped from the den of the hoodlums following what she described as a divine intervention.

The Public Relations Officer of the Adeyemi College of Education, Mrs. Seto Olatuyi, said Olaniyan is a 100-level student in the History Department of the institution and school authorities declared her missing when her friends could not locate her.

Reacting to the development, the Provost of the College, Prof. Olukoya Ogen, expressed gratitude for Olaniran’s safe return and warned the students to always be vigilant in their movements.

As of the time of filing this report, Olaniyan was still receiving treatment at a hospital.