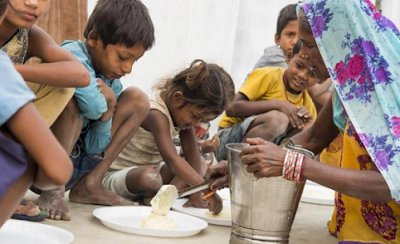 Global hunger levels have risen for the first time in more than a decade, now affecting 11 percent of the world’s population, as conflict, climate change and economic woes bite, U.N. agencies said on Friday.

Last year, 815 million people were hungry - 38 million more than in 2015 - the five agencies said in the first global assessment since governments set an international target to eliminate hunger and malnutrition by 2030, as one of a set of so-called Sustainable Development Goals (SDGs).

The number of hungry began to rise in 2014, but this is the first time in more then a decade that the proportion of the global population going hungry has risen.

About 489 million of the hungry are living in countries affected by conflict.


“Over the past decade, conflicts have risen dramatically in number and become more complex and intractable in nature,” the heads of five U.N. agencies said in The State of Food Security and Nutrition in the World 2017 report.

“This has set off alarm bells we cannot afford to ignore: we will not end hunger and all forms of malnutrition by 2030 unless we address all the factors that undermine food security and nutrition,” they said.

Famine struck parts of South Sudan earlier this year, and there is a high risk that it could return there - and develop in other countries affected by conflict: northeast Nigeria, Somalia and Yemen, the agencies said.

David Beasley, the head of the World Food Program (WFP) described the latest figures as “an indictment on humanity”.