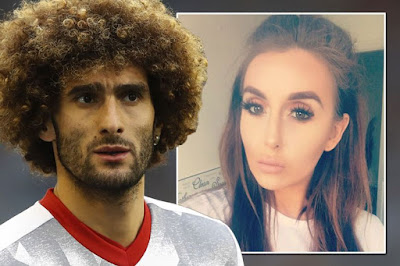 Wayne Rooney's drink drive girl Laura Simpson had a very flirty night out with ex teammate Marouane Fellaini - but it ended rather abruptly after she dropped a Big Mac in his pool.

According to reports wannabe WAG Laura, 29, had targeted four footballers before setting her sights on Everton striker Rooney - which also ended in tears after the married dad was arrested on suspicion of drink driving at the wheel of her VW Beetle.

Speaking to pals about her night with Fellaini, the Sun on Sunday reports the pair picked up a McDonalds after a night out and headed back to the 29-year-old Belgian's £4million pad.

She said: “I got my Big Mac out, took a bite and the rest of the burger slid out and fell into the water. I was mortified and he was really angry.


"I just remember seeing the lettuce and bread bobbing around on the surface and other bits slowly sinking. I can still see it now.”

Laura, who is currently on a Spanish holiday to escape attention, met the footballer at Manchester club Sakura back in 2014.

After chatting for 20 minutes, Fellaini asked Laura to come home with him. She agreed.
The pair went home together with a group of pals and were "messing around" in the room where the indoor pool is - she then dropped the burger in the pool.

A pal said: "It's a pain to have to get a pool cleaned especially because someone you just met dropped a burger in it."

The revelations come as friends said Laura is desperate to be famous - but has gone too far.

"[She and Coleen] even got matching handbags," a source told the Daily Star . "She obviously admires Coleen and the way she dresses.
"But it's one thing modelling yourself on someone – it's another trying to muscle into their life."

he newspaper also says Laura has boasted about bedding a Premier League star and having secret flings with other players, telling a reporter: "I could give you so many stories."

She added: "I have stories about me and a few household names and up-and-coming stars."