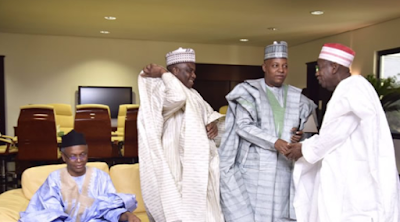 Governors from the northern states of the country who are members of the All Progressives Congress on Saturday said nothing would stop President Muhammadu Buhari from contesting the 2019 election.

Governor Ibikunle Amosun of Ogun State, a close ally of the President, also backed Buhari for a second term.

The development came barely 48 hours after the Minister of Women Affairs, Aisha Alhassan, vowed to ensure the realisation of the presidential ambition of a former vice president, Atiku Abubakar, instead of Buhari in 2019.

Her declaration made the Kaduna State Governor, Nasir El-Rufai, to declare in an interview with State House correspondents that APC governors and ministers would support Buhari’s re-election in 2019.


El-Rufai said Alhassan did not believe in President Buhari’s political ideology and that she voted against the President during the APC presidential primary.
The Northern Governors Forum made its position known through the Deputy Chairman of the group, Abdullahi Ganduje.

Ganduje, who is also the Governor of Kano State, said the support for Buhari was total and unconditional and that in case the President decided to seek re-election in 2019, Nigerians across the six geo-political zones would troop out to re-elect him.

The governor spoke through his Commissioner for Information and Culture, Mr. Muhammed Garba.

He explained that Buhari’s support base had increased over the last two years because of the transparent manner he has been handling the nation’s economy and his administration’s war against corruption and insecurity.

He said the foundation laid by the current administration would be consolidated and improved upon should the President decide to offer his services to the nation again in 2019.

Mohammed said, “The Buhari brand is a unifying factor because Nigerians across ethno-religious divides have come to see him as a man who walks the talk.

“For us in Kano for example, our support for him is 100 per cent. We know him as an honest Nigerian who thinks Nigeria first before anything else.

“His performance over the last two years — especially in the war against corruption, insecurity and terrorism — has been exemplary.

“Should he decide to hear our cry to seek re-election, we will not only support him but also do everything humanly and legally possible to ensure his victory.

“For those  who have the privilege of travelling outside Nigeria, it is common knowledge that we are now respected because of the value the Buhari administration has brought to governance.”

In the same vein, Amosun, who spoke to journalists on Saturday in Abeokuta, Ogun State, at a book launch, said the President has the right to a second term.

He said, “The only thing that can prevent President Buhari from contesting is if his health cannot take it.

“If not for this present administration, only God knows where Nigeria would have been. When the government came on board, it was like jumping into the pool at the deep end.”

He scored the Federal Government high in its fight against insurgency, insecurity, corruption as well as efforts geared at economic recovery through serious diversification drive.

Similarly, the Arewa Consultative Forum has said it will support Buhari in the 2019 presidential poll.

The socio-cultural group, however, gave a condition.

“If President Muhammadu Buhari is able to deliver on his campaign promises substantially and be as fit as a fiddle to undertake presidential responsibilities and tasks by the end of his tenure, there will be no reason not to support him,” the ACF Secretary General, Anthony Sani, said.