Whitney Houston Was In A Lesbian Relationship, New Documentary Shows 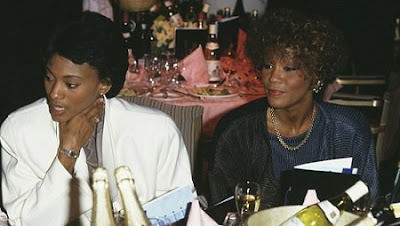 It sees Ellin Lavar, who dressed the singer, and her security guard, Kevin Ammons, confess that Whitney was bisexual and in love with her assistant.

After Whitney died in 2012, her ex-husband Bobby Brown said she might still be alive if she was allowed to be open about her sexuality.

In the documentary, her former bodyguard David Roberts even said that Robyn and Brown would have physical fights over their shared loved of the singer, and the intensity of their relationship even led to her exile from Whitney's inner circle.


Speaking exclusively to MailOnline, documentary maker Nick Broomfield credits Robyn for keeping Whitney 'on the rails' but believes her fans are too obsessed with the intimate details of their relationship.

The filmmaker, whose movie about the legend airs on the BBC this weekend, finds it bizarre that Whitney's fans are so interested in her sexuality and the nature of her relationship with Robyn.

He told MailOnline: 'It's almost like people want the condom or here's the stained sheet. I don't know what kind of conclusive proof one wants except this is the closest relationship for years that Whitney had.

'They shared a house together; they often shared the same bed. I think the most important thing is that it was the most productive, supportive and creative relationship that she had for probably 15 years.'

In the movie Ellin states her belief that Whitney was bisexual, having feelings for both Robyn and her husband Bobby Brown.

Ellin says: 'I don't think she was gay, I think she was bisexual. Robyn provided a safe place for her… in that Whitney found safety and solace.'

Whitney died in 2012 when she drowned after suffering a massive heart attack, brought on by years of cocaine abuse.

Her friends and family - and even Bobby Brown - believe that she might still be alive if she was allowed to be with Robyn.

Nick said: 'Bobby Brown loved Whitney enough to say if Robyn Crawford had been around he believed Whitney would still be alive. I think she did an amazing job of keeping her on the rails, keeping her more or less on time for interviews and that kind of thing.

'Certainly the people closest to Whitney, like Bobby Brown and Patti Howard, all feel that Robyn got driven out. If she stayed around, Whitney would probably be around too.'

Robyn worked as Whitney's assistant from 1979 and eventually earned the position of creative director before quitting in 2000.

Whitney's family and friends believe Robyn was pushed out by her mother Cissy Houston, who disapproved of their romance.