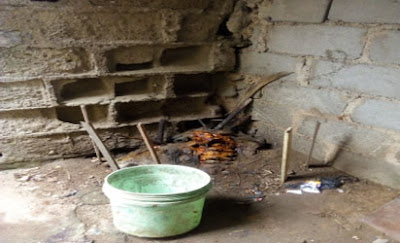 The lifeless body of a four-year-old missing child was, at the early hours of yesterday, found close to a shrine at Iwaya area of Lagos, with her throat slashed.

The toddler, Farida Ayomide Suleiman, who was suspected to have been used for ritual at the shrine, was last seen on Tuesday in the company of her siblings, going to a mosque around the area.

Form the mosque, they were said to have gone to a family friend’s house. However, apprehension set in when Ayomide was discovered to have disappeared, a development that led to a search around the area.

Hours later, an alarm raised by the girl’s mother alerted tenants of 28 Ogbe Close, who discovered the body of her missing daughter behind her window where the shrine is located.


Briefing journalists on the incident, Commissioner of Police, Lagos State Police Command, Fatai Owoseni, who visited the scene, said 10 persons, including parents of the deceased toddler, are in Police custody.

Owoseni said: “The DPO of Sabo Division alerted me at the early hours of this morning (yesterday) that a couple came to the station to say that their missing child’s body was found behind their window, near an Ogun shrine, with her throat slashed.

“I was at the scene till 4a.m. with detectives. We have recovered the corpse and also saw the tool with which she was murdered- a knife.

“Ten persons, including parents of the deceased, have been taken into custody for interrogation. We are not saying categorically that they killed the child; the shrine has been in the compound for years.

“If there is no conspiracy of silence, the tenants would have known that sacrifices have been going on in the shrine.

“The owner of the compound was worshipping in the shrine before he died. After his demise, we gathered that people used to come to worship at the shrine.”
Mother’s story

When Vanguard arrived the scene, it was observed that the building has been condoned off by policemen even as the occupants have fled.

The bereaved mother, Mrs Bunmi Suleiman, told Vanguard: “When news of her disappearance reached me, we started looking for her. At about 8p.m., I went to the back yard to fetch water for ablution before going to pray.

“That was when I noticed something on the ground, which I thought was a bucket of water. But when I flashed my torchlight, I discovered to my astonishment that it was my daughter. I screamed; my husband rushed out and alerted other tenants. We rushed our child to the hospital, where we were told that she had died.

“We moved into the compound three years ago. We usually see people coming to worship at the shrine, but never have we seen nor heard that they sacrificed human beings in the shrines. What they use as sacrifice are dogs.

“Yesterday (Tuesday), a man and a woman came with a chicken to sacrifice on the shrine. They called one of the children to help them kill the chicken, but he refused.

By the time the third child refused, they left only to come back at night to use my child to replace the cock that was to be used for sacrifice, with her blood spilled in the shrine.

“I don’t know those who usually come to worship here. After the death of our landlord, his children worshipped at the shrine, but they do not live here; they only come to collect house rent from us.

“Other people also come to worship and leave. There is no particular person that says at the shrine.”