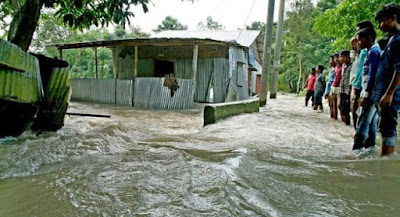 At least 221 people have died and more than 1.5 million have been displaced by monsoon flooding across India, Nepal and Bangladesh, officials said today, as rescuers scoured submerged villages for the missing.

In Nepal, severe flooding has left tens of thousands of homes totally underwater in the populous southern lowlands, with nearly 20 percent of the population affected.

"As per the data we have received so far, 111 have been killed, 35 are still missing and a search operation is underway," Home Minister Janardan Sharma told parliament today.

A third of neighbouring Bangladesh is flooded, with at least 29 dead as relentless monsoon rains pound the densely-populated riverine country. "Another 1.5 million people have been marooned," Reaz Ahmed, head of Bangladesh's disaster management department told AFP.