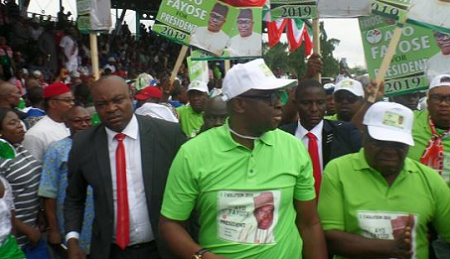 No Time!Governor Ayodele Fayose of Ekiti State has told members of the Peoples Democratic Party that he would receive them at the Presidential Villa in 2019.

He stated that the ruling All Progressives Congress was only given an opportunity to rule for one term, adding that the party has misused its chance.

Fayose, who is the Chairman of the PDP Governors’ Forum, spoke at the party’s non-elective National Convention, which was held at the Eagle Square, Abuja on Saturday.

He was surrounded by other governors elected on the platform of the party.


“When you come to the Villa in 2019, I will receive you warmly,” he told the party members.

He added that the PDP had bounced back to life and boasted that the party would return to power at the centre soon.

Fayose, who officially unveiled his presidential ambition at the event, stated that Nigerians were getting a raw deal in the hands of APC, pointing out that the party after completing its first term in office must

vacate the seat of power so that the PDP could take over and deliver the dividends of democracy to Nigerians.

Dressed in his 2019 presidential campaign shirt with a cap to match, Fayose said, “The PDP is now a religion; a belief that we are going back to our Villa. God will be with us. Those people there, at Aso Rock, they don’t know what they are doing. We make mistakes but our ability to correct them is what is important. It is time to arise and shine. 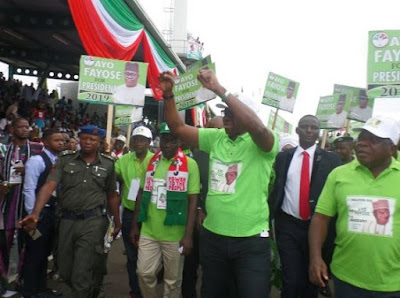 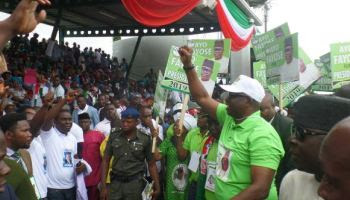 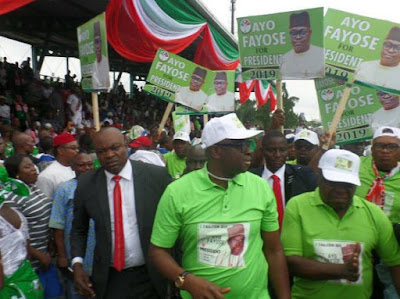