Trump Claims He Could Be The Second Most Presidential President Ever, But He Chooses Not To Be 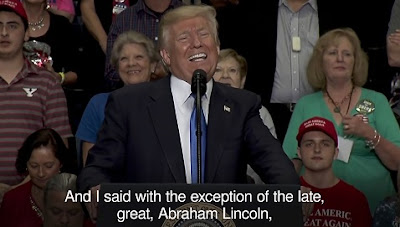 Donald Trump is the second most presidential president ever to hold the office, he claimed last night.

The President, who is under criminal investigation for obstruction of justice, said only "the late, great Abraham Lincoln" had the capacity to be more presidential than he is.

He made the bold claim at a rally in Youngstown, Ohio, last night. The previous night, he gave a speech to a crowd of 40,000, mostly children, in which he cursed, attacked the media, boasted about his election victory and told a lengthy anecdote about a property mogul he met at a cocktail party.

He also claimed the crowd at the Boy Scouts National Jamboree was "record setting." The Boy Scouts Of America later clarified that this was not untrue. The 1960 event attracted some 56,000 scouts and volunteers. He told the 7,000 capacity arena that people complain he's not politically correct.


He said in response that being "presidential" wouldn't "get the job done."

And he added: "It’s much easier, by the way, to act presidential than what we’re doing here tonight, believe me.

“And I said: ‘With the exception of the late, great Abraham Lincoln, I can be more presidential than any president that’s ever held this office. That I can tell you. It’s real easy.

“But sadly we have to move a little faster than that.”

He also claimed to have "with a few exceptions" done more in his first six months in office than any other president.