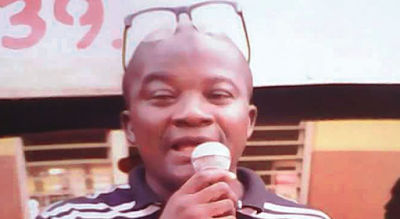 A member of the All Progressives Congress, Alhaji Lateef Ajikanle, has been electrocuted in his home on Bolaji Omupo Street, Somolu.

The father of four reportedly returned home after prayers in a mosque to meet his compound flooded.

It was gathered that the flood was worsened by the rubble of a collapsed fence owned by a poultry farmer on an adjoining street, Lisabi Street. Punch Metro learnt that the Oyo State indigene waded through the flood. He was reportedly picking rubbish in the water when he was electrocuted.

A neighbour, who attempted to rescue him was also reportedly electrocuted, but escaped death by a whisker. Officials of the Ikeja Electric, Onipanu Business District, were said to have been alerted to the incident.


After power was disconnected from the community, Lateef, who also worked with the State Universal Basic Education Board, was reportedly rushed to a general hospital where he was confirmed dead.

His younger sister, Monsuru Ajikanle, told Punch correspondent on Sunday that the 50-year-old was preparing to participate in the last Saturday’s local government election when tragedy struck.

She said, “He went to the mosque that day. The rain started early in the morning and everywhere was flooded. He was coming back from the mosque around 7am when he saw that the fence owned by the poultry farmer on the next street had collapsed on the pumping machine in our compound.

“Also, the flood water could not flow out and there were waste paper and other dirty materials everywhere. He started picking the rubbish from the water. He was doing that when his hand touched the live wire exposed after the fence fell on the pumping machine. He was electrocuted.

“One of our neighbours, Femi, ran into the flood to help him, but the electric current in the water forced him back. We called the Ikeja Electric to disconnect the power.”

Monsuru told Punch correspondent that Lateef was rushed to the General Hospital, Somolu, where he was confirmed dead.

Punch Metro learnt that the victim’s wife had been taken to their family house in the Surulere area.

Punch correspondent was told that Lateef worked in the Supply and Finance Department of SUBEB, Somolu.

Another family member, Dele Alakija, blamed the owner of the poultry for the incident.

Alakija said, “The poultry is on Lisabi Street, and the fence that collapsed was built by the owner to separate the poultry from our compound. We had reported to the local government about a year ago that the man’s operation was making life difficult for us and he should relocate, but nothing was done.

“Alhaji (Lateef) had written a letter which we planned to submit on the menace of the poultry. When the fence fell on the pumping machine, it exposed a live wire from the machine and that was what killed him. The poultry should cease operation. The offensive stench of the birds and the noise from the generator are unbearable.”

Punch correspondent learnt that the incident was reported to the police at the Somolu division.

A check on the Facebook page of the deceased showed he was indeed a staunch member of the APC as some friends paid tributes to his memories and leadership.

Among his last activities on the social media was the poster of the chairmanship candidate of the APC in Surulere.

A top source at the General Hospital, Somolu, confirmed the incident, adding that Lateef was brought in dead.

“A 50-year-old man was brought by some neighbours. They claimed that he stepped on a live cable during the heavy rain and was electrocuted. He was brought in dead,” he said.

The state Police Public Relations Officer, ASP Olarinde Famous-Cole, said the police were not aware of the incident.

“Nothing like that at Somolu division please,” he said.

The Head, Corporate Communications, Ikeja Electric, Felix Ofulue, said the company was not to blame for the death.