Evans’ Wife Hasn’t Visited Home Since She Got Married - Brother 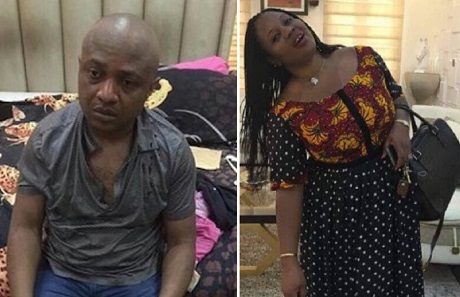 The elder brother of Mrs. Uchenna Precious Onwuamadike, wife of the dreaded kidnap kingpin, Mr. Chidumeme Onwuamadike, a.k.a Evans, Mr. Chukwuemeka Okoye said yesterday that his sister has not visited her village at Awo Oraifite in Ekwusigo Local Government Area of Anambra State since she got married in 2006.

He told Vanguard yesterday that even when their father died in 2014, Uchenna, who is the last of 13 children of the Okoyes, and her husband, Evans, did not attend the burial.

He said that he has not been communicating with his sister even on telephone, adding that he does not even know that she is married with five children.


When shown the photograph of his sister and her five children, Chukwuemeka, a farmer and a daily paid job man at Oraifite market said he would not be able to identify his brother in-law, Evans, if they meet.

He said: “Our father was very sick when Uchenna got married and he was bedridden for eight years before he died in 2014.

It was her father in-law that came for the burial. Once she got married, nobody heard from her again and sometimes we heard that she was living abroad.

“My elder brother who is living abroad once told me that he communicated with her and there was no way I could know their present predicament because I do not watch television, neither do I have a mobile phone that can be used for browsing.”

He said that despite the poverty in his family, Uchenna and her husband never cared and said that he had not even heard that his sister’s husband was a kidnapper.

Their aged mother, who is said to be diabetic, is presently staying with one of his brothers in the North and has been away for over one year.

Uchenna’s cousin, a Reverend of the Anglican Church, who preferred anonymity said they did not know much about Uchenna because she was not communicating with the family, adding that he only knew about their present situation from the internet.

Community housing Evans den starts residents’ profiling Meantime, Community Development Association, CDA, heads in Bungalow section of Jakande estate , Oke-Afa, Isolo area of Lagos where Evans, had one of his hide-outs have begun to profile residents with a view to ascertaining their identities and means of lively hood.

The action, is coming on the heels of the confessional statement by kidnap kingpin, that he used one of the bungalows on Green street to keep abducted victims.

Evans, led operatives to the building weekend, where some left over food used to feed abducted victims were seen.

Vanguard gathered that two members of the gang who acted as watchmen to abducted victims, occupied the bungalow.

They however fled when news of Evans’ arrest reached them. When Vanguard visited Green street yesterday, residents were amazed that they had been living with a criminal without having an inkling. One of them, Fatai Owolola said: “We never knew that the building was used to keep abducted victims.

I usually saw two young men coming in and out of the building, without suspecting anything bad was going on there.

The only time cars came in was at night and they drive out almost immediately.” The kidnappers were said to have taken advantage of the quietness of the vicinity.

Everybody goes out in the day time and comes back at night without prying into other peoples business.”

Another resident Mrs Chikwendu Odinaka who claimed to have been in the area for over 10 years, said: ”Community leaders of all the bungalows streets have printed forms for residents.

This is aimed at documenting the identities of all the residents and their places of work, in order to know where to look for them in case of eventuality.

‘’We were shocked when policemen brought Evans, that we had been reading about, to one of the bungalow buildings on Green street on Sunday.

‘’Why he chose there instead of better high brow areas, remains a question only him can answer,“ she said. The streets where the profiling will be done are: Brown, Purple, White, Blue, Green, Pink, Silver, Gold and orange. Blue and White streets community started distributing the forms yesterday.