I Wanted To Kill Myself Before Police Arrested Me – Evans 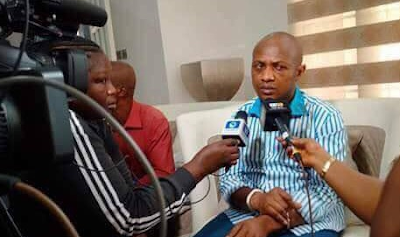 Billionaire kidnapper Chukwudubem Onwuamadike a.k.a. Evans said he ran inside his house to commit suicide when he saw policemen at the gate of his Magodo mansion but was pursued and arrested before he could kill himself.

“I want to die. I can’t stand this humiliation’’ he emotionally said in a chat with Saturday Vanguard a few days after his arrest.

Being overcome by emotion was the least thing anyone would expect from someone, who lived in his own world with a larger than life image. But for notorious kidnap kingpin, Chukwudubem Onwuamadike, aka, Evans, who was arrested last Saturday at his Magodo Estate mansion, Lagos, the end is not just near but had come.


The 36-year-old suspect, who is a native of Akamili in Umudim Quarters, Nnewi, Anambra State, disclosed at the Lagos State Police Command, amidst tears, that he was being humiliated beyond limits, noting that he preferred dying than to continue living in pains.

I knew Police’ll not be fair to me

Evans said he knew the Police would not treat him fairly when he was caught, given the kind of atrocities he committed over the years.

It was based on this assumption that he told Saturday Vanguard that he made up his mind to end his life the moment the Police gained access to his house.

He stated that the Police officer who pursued him as he ran into his house when he sighted them at his gate, prevented him from completing his mission.

Regretting that he was not able to end his life that moment, he looked at this reporter and asked:

”What am I living for? When I saw the policemen dash towards me I ran inside. I was not running to escape. I ran to see if I could end it before they could take me. But time was short. They followed me into the room.

”I want the government to train and educate my children.

Not done, he added thus: “I have seen it all, I want to die and have some rest. The only thing I want now is for the government to take care of my children, educate them and don’t allow them to become criminals. I have begged Abba Kyari, to do this for me and he assured me that the Lagos State government would take them to an orphanage home where they would grow to become better persons in the society. I have been diagnosed with Colon Cancer and I wish I could die now”.

Asked about the exact location of his wife and children, Evans said he sent them to Ghana four days before he was arrested, adding that they had planned to relocate to Canada, where he said he wanted his children to school.

He further disclosed that he gave his wife the sum of N20million for her upkeep, stating that he did not know their location at the moment since the day he was arrested.

Evans also revealed that his wife, who he has been married to for 11 years only knew he was a kidnapper a few days before his arrest.

How my wife knew I am a kidnapper

He said: “My wife didn’t know I am a kidnapper. I kept all my kidnapping activities away from her and she thought I made my billions from importation and illicit drug dealings. We didn’t allow visitors to visit our house for any reason. If she must receive any visitor, I usually ask her to take them to a hotel.

”But a few days before I was arrested she discovered I was worried and restless. My blood pressure went very high and she asked what was happening. I opened up to her and also told her that security agents were everywhere looking for me. Initially, I thought it was the Department of State Security, DSS, that was hunting for me.

”I also told her to be very careful with her phones and to be mindful of the people who call her. I also told her to always switch off her mobile phones. While I was still contemplating on what to do, I got information that one of my girlfriends known as Ijeoma had been arrested and taken to SARS, Ikeja. That was when I knew that the people hunting me were policemen.

”I called my second in command, Felix and warned him to be careful that the Police were closing in on us, but before I knew what was happening, I learnt that Felix had been arrested in Ojota.
I sold my cars, stopped my children from going to school

‘’I immediately moved my family out of my house and we relocated to a hotel in Agidingbi Ikeja. My children stopped going to school, then I started making preparation for them to travel to Ghana where I have three houses.

A few days later, I got news again that my younger sister, Nzube had also been arrested by the Police. I heard they were trying to use her to lure me. I then sent words to one of my friends in Nnewi to take my mother to Bayelsa State where I felt locating her will be difficult. Then I sold three of my cars, leaving just a Grand Cherokee SUV.

Four days before my arrest, I sent my wife and children to Ghana and I paid the sum of N20 million to the account of a bureau de change operator in Ghana. She collected the money in Cedi. I was planning to join them the day I was arrested.“