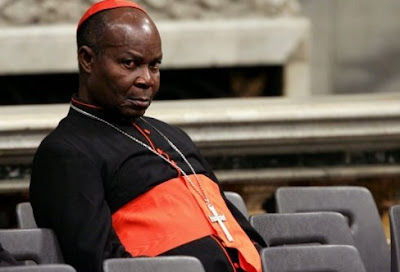 Former President of the Christian Association of Nigeria, Anthony Cardinal Okogie, has dismissed the federal system of government being practised in Nigeria as not serving the people.

The former Catholic Archbishop of Lagos, in a statement titled, ‘Deprivation and Agitation: A Reflection on Nigeria’s Late 2017 Budget,’ which was sent to The Punch yesterday, decried the poor state of livelihood of Nigerians.

He said every aspect of life in the country was in “downward motion.”

Okogie said, “Some people do not want to hear of restructuring.  However, for how long shall we fail to see the urgent need for far-reaching constitutional reforms in this country?  The current arrangement is not serving Nigerians.  The relationship between the government and the citizens places the citizen at gross disadvantage and the politicians at an undue advantage.

The retired bishop stated that the level of poverty in the country was not acceptable. He charged Nigerians to question those who managed the resources of the country.

He said, “To say that the quality of life of the average Nigerian is low is to state the obvious.  Whether one talks of education, medical service delivery, security or the economy, every aspect of our life in this country is in downward motion. The extent of poverty experienced by our people is simply unacceptable.

“This country has more than enough resources to make life livable.  If there is so much discomfort, we must interrogate those who manage the affairs of our country.  Why is it that the government  – federal, state and local  – has failed Nigerians?”

The vocal cleric said Nigerians witness the ritual of budget presentation to the National Assembly by the President every year.

He recalled that the 2017 budget was presented to the legislature in the twilight of the 2016 and was just passed on May 14, 2017, which was “more than five months into the year and close to six months after it was presented.”

He said, “For a country that should be in a hurry to exit the Destitution Avenue, this is simply unacceptable.  It is another instance of failure of governance.  Failure of governance is when government fails to serve the people. Nigerians should be worried about the way the budgetary process runs in this country.

“In the period when the budget has yet to be passed, how is government carrying out its functions?  Who is accountable to who when it comes to how money is spent?  Does this reflect a country that really wishes to put an end to corruption? But while there was delay in passing the budget, there is an early bird approach to the politics of 2019.  The budget was not passed but politicians were positioning themselves for the 2019 presidential elections.”

The cardinal added, “Now, deprivation has turned into agitation.  In the absence of a budget, the economic conditions in which we live continue to bite.  Nigerians are hungry and angry.  In their anger, they turn against each other on the social media, using unprintable language, threats and violence to sort out their differences.  Young Igbo insult the Yoruba, young Yoruba insult the Igbo, the North and the South have suddenly realised that they cannot live together.

“In all this, instead of facing their common enemy – politicians who abuse their offices and steal the wealth of the land, thus depriving us of decent living – young Nigerians tear each other apart in a society where civil discourse has become an unwanted alien.

“We have said it before that we live in clear and present danger.  We said it when herdsmen went on the rampage and arms were being brought into Nigeria by ‘ghost importers.’  Now, we should ask ourselves: is there a correlation between illegal importation of arms into Nigeria and the drumbeats and dance steps of war we are currently witnessing?”