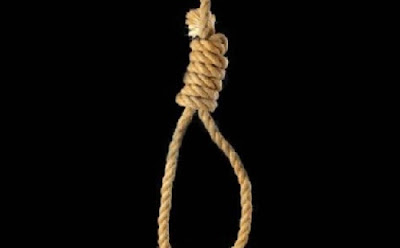 A 52-year-old woman identified as Opeyemi Babatola has reportedly committed suicide by hanging herself at her residence, located as Aule area of Akure, the Ondo State capital.

It was learnt that the husband of the deceased, Pastor Adeolu Babatola was the first person to see the deceased hanging in their house yesterday.

The cause of the action of the deceased to hang herself was still unknown at the time of filing this report. A source said the incident was still mysterious to the husband and members of the family of the deceased, Pastor Adeolu Babatola who was already in the police custody at the press time .

According to the source, Opeyemi told her husband that she was going to a mountain to pray on Friday but she went into one of the rooms in her house to hang herself while the husband thought she had actually gone to the mountain since Friday .


The source said, “She told her child and her husband that she wanted to go to a mountain to pray, so since Friday her husband was thinking she was at the prayer mountain praying for the family because that was not her first time of doing so.

“On Monday morning the husband went to the back of one of the rooms in the other apartment of the house and discovered that there were many houseflies by the window side. So he opened the room and found his wife hanged. He had to cry out to the neighbours.”

It was gathered that immediate after the news of incident was broken in the area, the police was invited to the scene but they could not do anything to untie the woman.

An eyewitness said after some hours some traditionalists sighted at the scene to perform some rituals to untie the deceased.

All efforts to speak with the husband of the deceased was not successful as he declined to comment on the incident.

When contacted, the Public Relations Officer of the Ondo State Police Command, Mr. Femi Joseph confirmed the incident and said investigation had begun over the matter.

He also disclosed that the husband of the deceased, Adeolu had been invited to the command for interrogation.

He said, “The husband is with us and helping us in our investigation, the husband told us that on Monday he was perceiving some strange odour and houseflies in one of the rooms in the house, when he checked inside, he saw his wife hanged.”

The PPRO however noted that it could not be certain if there was any criminal involvement in the incident but insisted that the investigation was still ongoing.