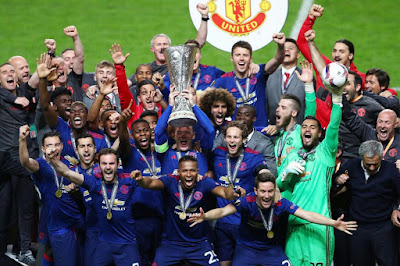 Paul Pogba propelled Manchester United towards a 2-0 victory over Ajax on Wednesday in a Europa League final rendered heavy with emotion by this week’s terror attack in Manchester.

A night that began with a moment of silence, then applause, in memory of the 22 people who died at Manchester Arena on Monday ended with United completing their trophy collection through goals from Pogba and Henrikh Mkhitaryan.

Reminders of the attack were everywhere at Stockholm’s Friends Arena, from United’s black armbands to the chants of “Manchester!” from their fans, while Pogba, too, was grieving, following the recent death of his father.

Victory enabled United manager Jose Mourinho, who said prior to the game that he and his players were struggling not to think about the tragedy, bring his maiden Old Trafford season to a successful conclusion.